Or “Walking around Malaya for an hour and fifty-seven minutes.” Having recently watched the not-dissimilarly themed Three Came Home, which predates this by six years, I was convinced to give Alice a shot, on the basis of reviews which proclaimed it superior. I wasn’t that impressed. As the first sentence of this review suggests, it consists of a lot of women and children staggering from place to place, occasionally falling over from malaria for a bit of variety. I don’t deny it’s likely an accurate representation of what happened to those unlucky enough to be left behind when the Japanese swept through South-East Asia in World War II. However, accuracy doesn’t tend to make for good cinema, and even the tacked-on romance doesn’t feel authentic. 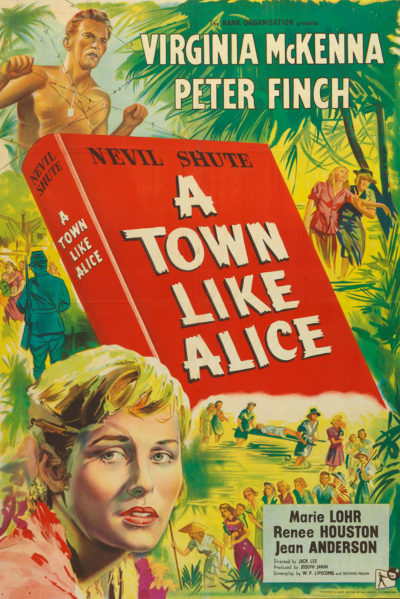 Told mostly in flashback, the heroine is Jean Paget (McKenna), who in 1942 is is working in an office in Kuala Lumpur, when Japan invades. After staying to help her boss’s family – I trust that will be reflected in her next performance appraisal – she’s not able to get to safety, and becomes a prisoner of the Japanese. The aim becomes to get onto a ship for Singapore, along with the other women and children in her situation. But everywhere they show up, the Japanese order them to go somewhere else. On her meanderings, she meets young Australian soldier Sergeant Joe Harman (Finch), who tells her about his home in the Australian outback. He tries to help out Jean and her fellow inmates with supplies, only for this to backfire, and Joe ends up nailed to a tree following the theft of an officer’s chickens.

That’s about the dramatic peak here, with things petering out thereafter. The passage of several years before the end of the war is casually dismissed with a single line of dialogue, though I guess three years of rice-farming would be about as entertaining as the walking around Malaya we’ve sat through. If the plot is underwhelming, the film is at least semi-rescued by decent performances. McKenna is likable and you care about her character, as she is punted from place to place, even bouncing religious quotes off village elders when necessary to convince them to allow her ragtag group to stay there.

I also liked most of the supporting cast, such as the elderly, upper-class woman who proclaims, “My dear, there’s such a thing as keeping up appearances.” After two years of WFH, where I have persisted in putting trousers on every goddamn day, I can only concur. Finch, then almost unknown, offers square-jawed masculinity and not a great deal more, though it’s likely still more depth than is afforded to the Japanese. It all feels a bit like a paean to the British upper-classes and their endurance and fortitude in the face of unspeakable adversity, such as being unable to obtain Earl Grey tea. The results are not my cup of tea, in terms of war or women-in-prison films.