Very disappointed by the lack of actual bicycles in this. One and a half-stars.

That said, I do wonder how much got lost in translation here, because there does not appear to be 99 of anything present in this film. Least of all cycling swords, whatever they might be. The language issues don’t end at the title either, for this is the kind of complex plot of double-crosses, assumed identities and mysticism which requires clear explanation. It doesn’t get anything approaching such, especially at the end. There, it seems to combine feng shui, magnetism and gender identity, in a way which feels like you need a post-grad course from a liberal arts university, in order to understand it. 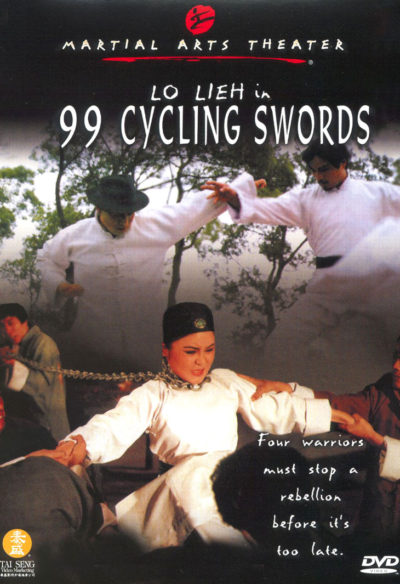 With regard to the plot at the higher level, let’s start with the IMDb synopsis: “When political rebels begin to cause trouble in a small town, the warlords command a village official, to roust them. He in turn passes the job onto four martial arts masters.” I’m glad this was available in writing, for the movie itself never bothers to explain it. We do get the concept that there are the Four Dragons, who are seeking a mysterious figure in white, Chu Er Ming. He seems to have help from a double-agent inside the group. Beyond that? I’d be lying if I said I was sure of the details. The Dragons are joined in their quest by various outsiders, including Sha Chun-lung (Shang-Kuan). She is dressed as a man. That’s never explained either.

This is a kung-fu film, admittedly, so we are here for the fights. The film doesn’t skimp on those, and the plethora of people wandering around provide plenty of combinations for that. Hsu seems particularly fond of using reverse footage. Not just for the usual reasons of making people look like they’re jumping up onto things but, for example, to make a fighter look like he’s catching a stack of cups thrown at him. It’s cute the first time you see it: the rule of diminish returns applies thereafter. The most imaginative element is likely Sha’s fur hat. This contains pipes that can be assembled into a sword which seems to fire heat-seeking missiles. Look, I’m just documenting this stuff. Don’t @ me.

The villain is not a bad kicker, and a couple of his blows are reasonably impactful. He also, at the end, somehow succeeds in duplicating himself, so there are ten (more or less) copies of him fighting the surviving members of the Four Dragons and their allies. Why didn’t he use this formidable talent earlier? Sadly, the majority of this is not as imaginative as the above, being fairly generic fighting, stuck in a pre-Bruce Lee time. Matters aren’t helped by the dubbing, with a script that seems more intent on lip-synch than making sense. Every other sentence could be yelling random vegetable names, and it would be scarcely less coherent. Parsnip! Cucumber! BEETROOT!