It has been over 20 years since Cronenberg left the field of body horror behind, with eXistenZ. Since then, he has worked in other genres, such as with A History of Violence. The results have been a bit variable: while some have been decent enough, they’re still well short of the sublime genius displayed in things like Videodrome. So I was quite excited to hear he was going “back to his roots”. Even the title shares its name (though that’s all) with his sophomore feature, made in 1970. I’m sorry to report, this isn’t going to sit alongside his previous classics. It occupies similar territory, at the nexus of sex, violence, politics and technology. Yet this lacks anything like the narrative punch. 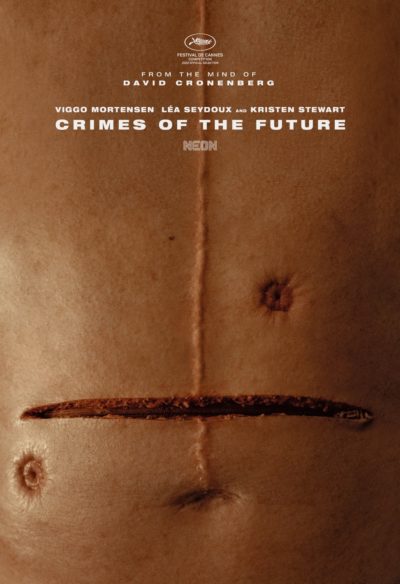 Crimes takes place (surprise!) in the future, where humanity has largely defeated disease. Yet our species is also changing, in a variety of strange ways, both natural and artificial. Saul Tenser (Mortensen) is one example, his body perpetually spawning bizarre new organs. These are removed, as performance art pieces, by his surgeon partner, Caprice (Seydoux). This brings them into conflict with the state, and its National Organ Registry under Wippet (McKellar), as well as the police who want Tenser to rat on a group of radical evolutionary activists. They have modified themselves to consume plastics, a change which appears to have become part of their genetic structure. It is an update the authorities want to suppress, by any means necessary.

You can certainly tell this is a Cronenberg movie, with elements and shots that will remind you of previous works, all the way back to his earliest features. Crash, with its transgressive combination of sensuality and brutality, may be the most direct predecessor: Timlin (Stewart), a colleague of Wippet, tells Tenser, “Surgery is the new sex.” It’s a concept the film fully embraces, most obviously when Caprice uses a newly-installed zipper in Tenser’s abdomen, to perform oral sex on his internal organs. Yet it’s little if any more disturbing, in concept or execution, than James Spader fucking Rosanna Arquette’s scar, all the way back in 1996. Certainly, the rest of cinema has caught up with, and in some cases arguably passed, the King of Venereal Horror. [Titane honks aggressively from the corner…]

It also lacks the sense of accompanying a character on their journey: when we meet him, Tenser already feels some way beyond anything to which I can relate. The project had been in pre-production in the mid-2000s, with Nicolas Cage or Ralph Fiennes as Tenser. Perhaps it might have worked better at that point. Here it seems as if Cronenberg is dutifully ticking off the checkbooks expected from a Cronenberg movie, rather than out of particular enthusiasm for the project. That he recycles one of his own titles from fifty years ago, is perhaps an indication he’s spinning his wheels a bit. Hey, he’s 79: like Paul Verhoeven (five years older), we should likely be grateful David is simply still making movies.