This will be the future after Roe vs. Wade gets overturned. Women will be forced to carry their part-Cadillac babies to full term. I’m literally shaking right now. To think, I believed that Lamb would be the most bizarre movie I saw this month. Less than 24 hours later, Titane says “Hold my beer…” and delivers half a film which is an uncompromising combination of David Cronenberg’s Crash and Shinya Tsukamoto’s Tetsuo: The Iron Man. The problem is, it’s only half a film. The other fifty percent is radically different, and the two just do not mesh at all. It’s like an automobile chop-shop welded the front of a Citroen 2CV onto the back of a Ferrari. The results are certainly interesting to look at, but you wouldn’t want to drive it. Or have sex with it. Let me just factually detail the plot. 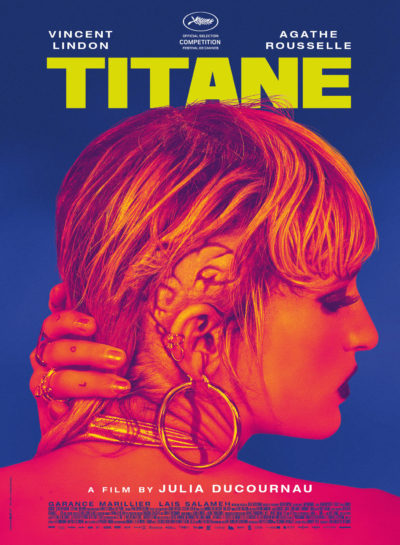 Alexia (Rousselle) has been a bit wonky since a childhood car-crash left her with a plate in her head. She now makes a living as a go-go dancer at car shows, while her main leisure pursuit is serial murder. After one performance, she has sex with a Cadillac (not in: with), and gets pregnant by it. As the authorities close in on her murderous activities, she opts to hide out by adopting the identity of a child who went missing 10 years ago. She convinces his father, Vincent (Lindon) of her ruse, and moves in with him, working alongside Vincent as a firefighter [The Wikipedia synopsis includes the immortal line, “After the party, Alexia has sex with a firetruck”…]. But as her pregnancy progresses – we’re talking oil oozing from places not normally a source of petroleum-based product – it becomes ever harder to maintain the deception.

If the film had concentrated on the serial killer and automobile sex stuff, this would have been insane. Ducournau clearly has a no-holds barred approach to body horror, as was clear from her last movie, Raw. That had its flaws, and her follow-up is something of an improvement – at least in this section. It sells the concept with the necessary commitment, and Rousselle is certainly giving her all. The actress seems curiously averse to clothes, though the nudity here is  increasingly of the thoroughly unerotic kind. While there’s no reason pregnancy can’t be beautiful, here it’s depicted more as your body rebelling against you – The Brood would be another Cronenberg inspiration.

Unfortunately, I found the other half of her story, where Alexia becomes a cuckoo in Vincent’s nest, considerably less interesting, It comes across as less plausible, and considering that’s compared to “I can’t believe she fucked the Cadillac”, we have a problem. I’ve seen The Impostor, so know the concept is based in reality (albeit without the lengthy gender conceal party), but the execution is well short of convincing. Plot threads, such as Vincent’s use of steroids are introduced, then discarded without resolution, and I found myself making hurry-up noises, encouraging the movie to get back to the more internally combustible elements. Still, half a good movie is better than no movie at all, I guess.