Make no mistake, Yuen is the greatest action choreographer in the world. His list of stellar work, both in Asian and Hollywood cinema is amazing. Kill Bill. The Matrix. Crouching Tiger. Kung Fu Hustle. You’ll understand my excitement to see him direct a film written and produced by the equal legendary Tsui Hark. So why do I feel so disappointed? I think it’s because Yuen’s strengths lie in the real world. Sure, his fight scenes may be wire-assisted, but there’s always a palpable sense of physicality to them. They certainly don’t lack for impact. But here, there’s so much CGI, he feels less a director or even a choreographer, more a lead animator – and on the basis of this, Pixar won’t be calling Woo-Ping any time soon. Supposedly a remake of his 1982 film, Miracle Fighters (though the plot seems radically different), too much of this looks like bad green screen work, with actors rarely interacting with the virtual elements or the world around them. 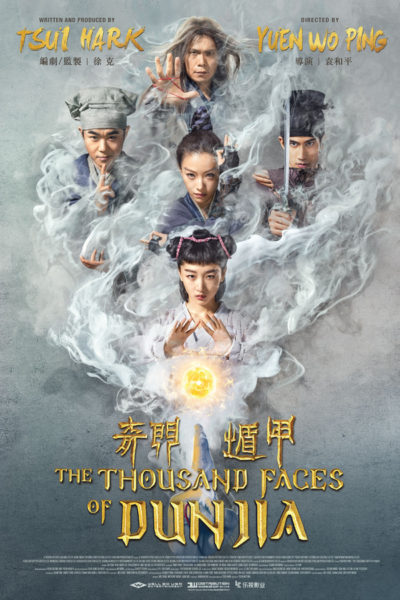 It’s also confused as all get out. Ignore the opening narration, which seems irrelevant and is more a red herring. The film seems to be about a creature, resembling a flying spaghetti monster, who is brought to Earth in a meteorite. It then frees another monster, imprisoned in an iron ball for centuries, and the two team up in a quest for world domination. Or something. Teamed up against them are a motley crew of humans. These combine a secret group called the Wuyin Clan, most notably Iron Dragonfly (Ni), with an enthusiastic rookie constable, Dao Yichang (Rahman). There’s a bunch of other stuff, such as a device called the Destroyer of Worlds (hmm, wonder what that does?), but little of it seems to matter. I’d be hard-pushed to explain much of it. Do not expect the slightest bit of resolution either, since the film ends on an abrupt cliffhanger, which is thoroughly unsatisfying. Poor local box-office buried any chance for a sequel, so you will be left hanging forever.

It does begin with a lovely sequence, in which the protagonists chase through the city after a gigantic, multi-eyed flying goldfish. It’s unashamedly ludicrous, over the top and great fun. The returns only diminish thereafter, as the second-rate CGI takes over, along with lazy scripting which leaves almost nothing explained, and characters that make almost no impression. Mind you, given their reduction to little more than copy-pasted avatars, I can feel some sympathy for the actors involved. However, even when they get a chance to act, they make little headway, not helped by the script’s breezy disdain for the finality of death. This is the kind of film which you can have on in the background, since there is an undeniable sense of visual style, even if the execution is some way short of impeccable. Just don’t make the mistake of paying it any attention or trying to make sense of the story, because the resulting headache will not be worth it.