I guess it is the way of pandemic-limited cinema these days. For this is the eight thousandth (roughly) movie I’ve seen in 2021 which opts to go with a tiny cast (four in this case), and film everything in a single location. The sooner this trend dies out, along with the COVID-19 virus, the better, because it is getting old. In this case, we have two YouTube vloggers, Claire (Canning) and Teddy (Chau), who have a channel devoted to high-end AirBNBs. But their viewership has been slipping of late, so they are hoping the latest episode will turn things around. Teddy is also planning to propose to Claire, which came as a surprise to me, since my first impression had pegged Teddy as queer as a three-dollar bill. 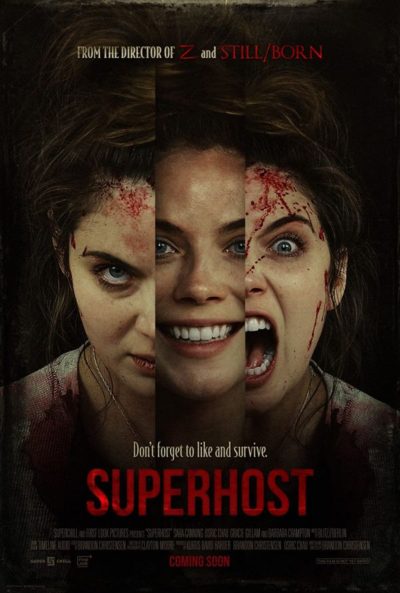 The destination they’re off to, is a lovely house deep in the countryside. Which, as we all know, is horror-speak for “Internet and cell service will function only when necessary to the plot.” Their host is Rebecca (Gillam), who seems more than a tad off, right from the get-go, exhibiting the kind of manic intensity which would have any normal person feigning an emergency back at home. This, again, is a horror movie, so stupid characters and behaviour are only to be expected. Naturally, Rebecca turns out to be as mad as a coot, increasingly violent and matters are not helped by the arrival of a previous superhost, Vera (Crampton). She wishes to register a strongly-worded complaint about an earlier entry on the couple’s vlog.

Gillam does at least appear to be having some fun with her role, eventually getting her teeth properly into the character and embracing the lunacy of it. Just a pity this doesn’t really bear fruit until more than fifty minutes have gone. You spend most of the time to that point in the company of Claire and Teddy, who manage to be both irritating and bland at the same time. So, I guess: well done? I think some of the former is at least partly intentional – the frequent exhortations to smash the like button, for example – but there is a staggering lack of chemistry between them. Never mind future married couple (even if Claire is more interested in the potential virality of Teddy’s proposal, than its actual purpose), they don’t seem credible, merely as friends.

Things unfold in a way that’s entirely predictable to the viewer, while apparently coming as a total shock to the victims, who have clearly never seen any horror films before. From a technical view, it’s quite competent: Christensen does have a decent eye, making the most of his single location and the surrounding woods. However, he also wrote the script, and his talents in that department are considerably more in question. I think the social commentary for which he is clearly aiming, might have been better served outside the horror genre, especially in such a predictable form as it appears here.