I have seen some terrible local films in my time, watched only out of a sense of duty to the state of Arizona and its film-makers. So, please trust me when I say that this is probably the worst I’ve seen since 2008, and The Virgin Murders. That did at least have the excuse of no resources.  This clearly had a significant amount of money spent on it, which makes the resulting woeful ineptness all the more painful to endure.

It’s inspired by the legend of the Lost Dutchman gold mine. This is a reputedly rich seam, hidden somewhere in the Superstition Mountains east of Phoenix, its location unknown since the death of its last owner, Jacob Waltz (actually German, not Dutch) in 1891. Many have ventured into the Superstitions in search of it. Not all have returned. Onto this, the film-makers have tacked the idea of an Apache Indian warrior (Yazzie), given eternal life so he can protect the gold from those who would take it from native lands. This is not a bad idea for a movie. You can see it becoming a straightforward wilderness slasher, with the spectral force scalping its way through a slew of treasure hunters. 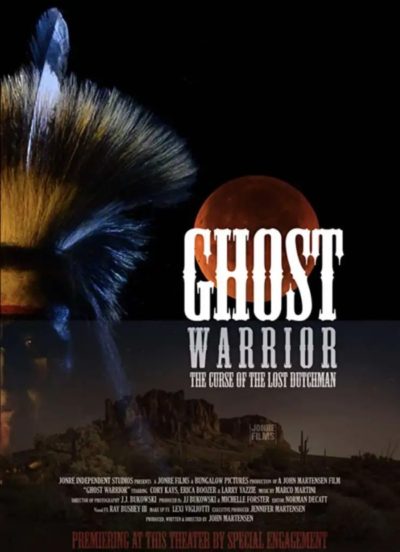 Unfortunately, Martensen decided to take another route, meaning the protagonists don’t even enter the Lost Dutchman State Park until forty minutes have elapsed, and it’s even longer before they encounter the titular pissed-off resident. Instead, he seems to be writing a soap-opera, about Jake Maloy (Kays), a veteran afflicted with PTSD, who went through an incident in Afghanistan, and consequently is unwilling to start a family with his wife Aurora (Boozer), who has a baby-related secret in her own past. If I wanted to watch this kind of underwritten and over-acted nonsense, I’m sure I would. Since I’m here for the carnage, hopefully at the Bone Tomahawk level, you’ll understand my impatience at… all this /waves vaguely at the first half of the film.

My irritation increased exponentially with the number of completely irrelevant scenes. Indoor rock-climbing. The restaurant dinner, I’m guessing there solely as payback for the establishment catering the production (how else to explain the banter about how good their bread is?). The scuba-diving flashback. And worst of all, the extended sequence where Jake and Aurora go up for a flight in her father’s light aircraft. Now, it takes no effort to come up with a way to tie this to the story. They fly over the Superstitions, see something intriguing, and decide to investigate from the ground. But, no. Instead, this is an empty, meaningless pleasure jaunt over Lake Pleasant – on the opposite side of Phoenix – which serves absolutely no purpose. At one later point, it did seem Dad might mount a search and rescue mission in his plane. Nope, he shows up on the ground.

Eventually, Jake and Aurora head into the park, and more pointlessness follows. The peak here is a random guy wandering up with ill intent towards Aurora, pulling a knife. He and Jake get into a fist-fight, which is particularly odd, because we find out later Jake is carrying a gun. If you’re not going to pull your firearm when a rapist with a knife is approaching your wife, what are you saving it for? “Undead Native American treasure guardians that are impervious to bullets” is the correct answer, apparently. What follows subsequently can only be described as a series of very poor decisions, by these supposed “competent hikers with years of experience”. They leave their GPS tracker behind. Their ATV overturns. Something happens to their phone (I’m still not sure exactly what). And worst of all, rather than going back along the well-maintained road on which they were driving, the pair opt for the most difficult route out possible.

Fortunately, even though they told the park ranger on entrance they were just there for the afternoon, a tent pops up out of nowhere, as they stumble about for a couple of days, banging heads, spraining ankles, and generally behaving like a wilderness version of The Three Stooges. Maybe all these accidents are due to the Ghost Warrior, though he took a far more direct, hands-on approach to other treasure hunters, as we previously saw. But that’s another problem here. We are explicitly told by the Warrior, “If your heart does not desire that what is not yours, I will let you live.” Jake and Aurora have demonstrated absolutely no interest in the Lost Dutchman treasure. They’re just out for an afternoon of ATVing. Why is he even bothering them? So the film can happen!

After a lengthy period of the Warrior lurking in the background (when not sitting in his poorly-rendered digital cave), and turning into a bear to scare Aurora pointlessly, before running off, our couple find a deserted cabin. I was hoping they’d find a copy of the Necronomicon Ex-Mortis, along with a reel-to-reel tape recorder. No such luck. Instead, we’re past the 75-minute mark when the Warrior eventually takes action (a reminder: against people who are simply trying to get the fuck off his tribal lands). This action is… apparently triggering Jake’s PTSD, so he has a nightmare that takes him back to Afghanistan. Aurora also has a nightmare, in which she manages to take the Warrior’s knife, which is the only thing that can hurt him. We literally get a “You’re sure he bled? We can kill him” line, after the cabin goes up in poorly-rendered digital flames.

As if ripping off Predator wasn’t bad enough, Aurora is used as bait for the Warrior, while going all Blair Witch. with a beanie and upturned torch. She narrowly dodges a descending tomahawk before he suddenly remembers the whole “If your heart does not desire” thing, and lets her go. Her previously sprained ankle is now miraculously healed, and she whizzes off at top speed, her husband also apparently entirely forgotten. Jake has to fight the Warrior – I guess not getting the benefit of the heart thing – who proclaims, “I will kill you,” then five seconds later “This is not over,” before vanishing in a puff of poor writing. Jake staggers back to the car park, which was apparently only a couple of hundred yards away, for a tearful reunion with Aurora. Yeah, the bitch who abandoned him at an Olympic pace, five minutes earlier.

There are some positives. Yazzie actually looks the part, cutting a fine figure in full Indian gear, with some creepy make-up. The photography is also competent, with good aerial shots that capture the scale and beauty of the landscapes [the Mogollon Rim stood in for the actual Superstitions]. Boozer’s performance occasionally could be mistaken for a real person, if you squint a bit. But these elements are overwhelmed by the negatives, including aspects I haven’t even got round to covering, like the supremely shitty soundtrack songs which mix the worst of country and R&B. Actual lyrics: “Warrior. Ghost warrior. Warrior. Ghost warrior.”

I take no pleasure in dismantling the product of local film-makers, since I know the effort involved. But there is a point at which it’s not possible to fake fawning adulation, and harsh, critical truth is the best medicine. Here that means acknowledging a script which is flat-out terrible, and should never have made it past first draft status. A limited budget and other resources can excuse a lot of things, but bad writing is not one of them.