Well, this was certainly… something. Married couple María (Rapace) and Ingvar (Guðnason) run a sheep farm way out in the middle of Iceland. It’s lambing season, but one birth is not like the others, a strange hybrid that’s something more than a sheep, but somewhat less than human. Maria names it Ada, after the infant daughter she lost and whom she still mourns, and raises the new arrival as her own child, even taking harsh measures to ensure Ada’s sheep mother doesn’t intervene. Things get more complex with the unexpected arrival – he’s thrown out of the boot of a car, for reasons which the film never bothers to explain – of Ingvar’s brother, Pétur (Haraldsson). 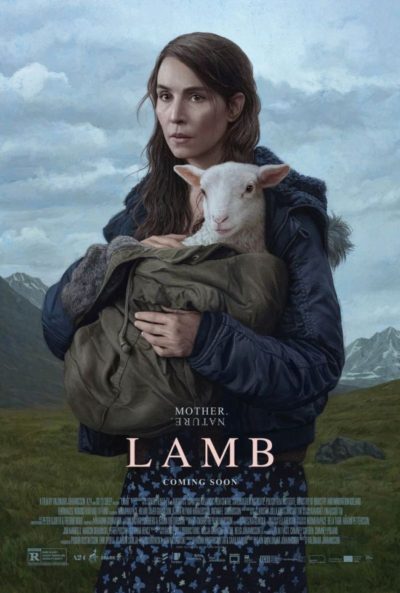 He’s initially disturbed by the “child”, though it does take a while before he comes out with the “No, really: what the fuck?” which we in the audience have been muttering repeatedly since the first good look we get at Ada. I can only presume Icelanders are even more polite than us Brits. At one point, it seems Pétur is going to take matters into his own hands, but he is eventually won over by Ada’s literally sheepish charms. However, his feelings for Maria force his departure from the house, and while she is driving him to the nearest bus-stop (which is probably in a different time-zone), we discover the truth about Ada’s origins. Daddy’s home, and he’s not happy about the situation.

Considering this is a film where very little happens, it’s more engrossing than you’d think. The early stages are mostly shots of Maria and Ingvar driving tractors, delivering lambs, etc. (I think Rapace basically went full Jeremy Clarkson, in terms of hands-on experience), with very little in the way of dialogue or even music. You are left to contemplate the peaceful wilderness, which is the kind of place that’s nice to look at, but I certainly wouldn’t want to live there. It seems to drive both residents a bit nutty. The arrival of Ada, and the matter-of-fact way in which she subsequently becomes part of the family is just bizarre. It’s brilliantly executed: a child with a sheep’s head and hooves, folks. Dressed like a human. At no point is this ever anything other than very, very weird.

I can’t say I was too impressed with the ending though. It feels like the movie stops, just about as it’s beginning to get going. I’d probably have preferred to see Maria go on a quest for bloody revenge in the sequel: “Lamb 2: this time, she’s not mutton around…” Cut the first half-hour, then add thirty minutes onto the end, and things could have been significantly improved, at least from an entertainment perspective. However, I sense Jóhannsson is probably more interested in the “folk” part of the “folk horror” equation, and this is intended as much as a rumination on rural life, as the monster mash it brushes up against in the final ten minutes.