After his Border Patrol agent son, Jax (Lucero), is captured by the Mexican Matutero cartel, Stone Spencer (Saquella) is ordered by the cartel’s local boss, Miguel Suarez (Pulita) to help in their activities This involves smuggling immigrants and other contraband across the border between Arizona and Mexico. Eventually, Stone has had enough, and turns from being the mild-mannered Italian restaurant owner he appears. For, like all mild-mannered Italian restaurant owners e.g. Danny Aiello in Léon, he is not just a connoisseur of pasta dishes. He calls in some favours from his old buddies in the Mafia, who come down to Arizona to help him stage an assault on the compound where Suarez is holding Jax hostage. 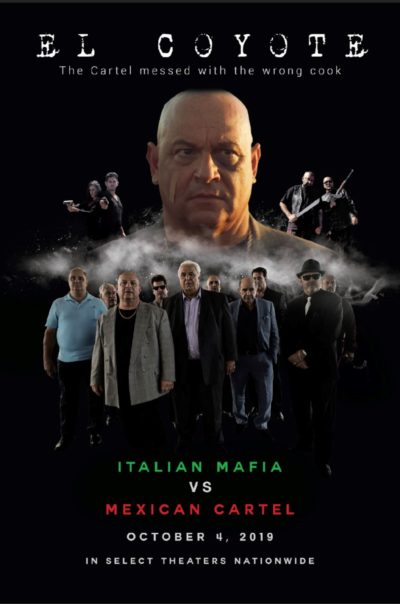 I have a whole bunch of questions about this scenario. Why would the cartel abduct a Border Patrol agent? Why would they seek to employ his chef father – unless they were catering for a quinceañera or something? And why would the Mafia be so forgiving of a man who apparently went into witness protection? None of this makes sense, and that’s even before we get the scene where a patrol officer mistakes Stone for Joe Pesci, when he actually looks more like Dennis Nedry from Jurassic Park. Shortly after, Stone goes into a convenience store bathroom and shaves all his hair off. This is, I suspect, intended to indicate his switch into badass mode, though it just confused me for several minutes.

On release – and it actually played theatrically on a reasonable number of screens, to my genuine surprise – this was eviscerated by one local Arizona critic, who said it “might be the worst movie of the year.” While certainly not good, I wouldn’t say it was that bad: given the factual errors the review contains, I’m wondering if the writer was paying much attention [On the other hand, it was the Arizona Republic, which largely stopped being a credible source for anything except sports, a good decade ago]. The idea of Mafia vs. Cartel is a fresh one, which does have possibilities, and seeing veteran actors like Robert Costanzo and John Capodice ham it up as geriatric wise guys, is enough to lift this out of the bottom of the barrel.

However, it’s definitely a case that for every step forward, there are several back. The cringe-inducing scene where Stone terrorizes his daughter’s boyfriend. Someone actually delivering the line, “Hashtag me too. Hashtag fuck you, bitch.” At least three separate codas, none of which add anything much to the movie. These failings, and many more, mean that in the pantheon of movies about Italian organized crime, this is a third division entry at best. It’s closer to one of those cheap Mexican narcopeliculas which we have on occasion reviewed, like Hijo de Buitre – just made on the other side of the border. I did get some slight pleasure from its use of recognizable locations, e.g. Sky Harbor Airport (top). Despite that, I remain unable to recommend this, in any good conscience.