Y’know 35 years ago, this might have been a blockbuster. I don’t mean that in a bad way, though it feels like a throwback to an earlier, simpler era of action. It is more a reflection of the cast, a good number of whom will generate warm, fuzzy feelings of nostalgia. Not just Ogilvy and Kensit: we also get Lee Majors, Stephanie Beacham and Michael Paré. Though the last-named is literally phoning in his role – and I’m unconvinced Danny Trejo was on the same continent either. His conversation with Ogilvy is filmed very carefully, shall we say. Anyway, if you want to spend 90 minutes going, “Isn’t that…?”, this is for you. Because it probably is them.

Burton (Moran) is a veteran with chronic PTSD, now homeless. He’s helped by Carver (Majors), who runs a support group for vets, which also includes Peck (Ogilvy) among others. Carver crosses the wrong man, crime-boss Goram (an appropriately unpleasant Mandylor), after the gang threaten his daughter Judy (Kensit), and ends up beaten to death for his temerity. Burton isn’t having that, so together with Peck and the rest of the old soldiers, they set out to take Goram down. Naturally, these senior citizens have a very particular set of skills. Skills they have acquired over a very long career. Skills that make them a nightmare for people like Goram. But mostly it’s straightforward shooting and punching their way up the villainous chain of command, interspersed with the expected amount of dry British banter, delivered nicely. 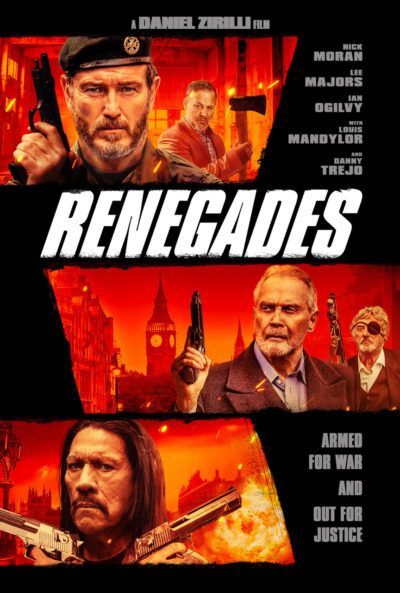 The Taken reference is entirely apt, since it was perhaps ground zero in the “geezer action” genre. While the Western had given us the old gunslinger, forced to strap on his irons one last time, Liam Neeson dragged the trope into the contemporary era. That then spawned other entries, from the big-budget (RED and The Expendables franchise) to the small (Bad Ass and Nobody). British entries range from the serious Harry Brown to the silly Cockneys vs. Zombies. This sits somewhere between those two; the Guy Ritchie influence is palpable, though lacking quite the same amount of charm. Ogilvy is an honourable exception, demonstrating exactly why he was a leading contender in the eighties to succeed Roger Moore in wearing the Bond tuxedo.

It’s a mild shame the PTSD angle is all but discarded. This is effectively played by Moran early on, then he suddenly “gets better” and it’s never mentioned again. Not sure this is how PTSD works. The action is a little underwhelming as well. While functional enough, there’s too much digital gunfire for my taste, and Moran isn’t exactly Scott Adkins (though who is?). Zirilli’s fondness for overhead drone shots gets excessive, occasionally making this feel like Grand Theft Auto 1. These criticisms should not be overemphasized though; they’re more paint scratches than anything. For the character work is lovely, and this carries the film along its route, more than adequately. Grab a carton of Um Bongo and a bag of Monster Munch, curl up on the sofa, and enjoy a throwback actioner.

The movie is out in select cinemas today, and on demand December 6.