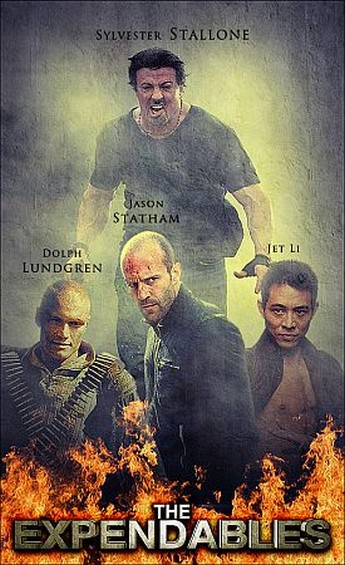 This throw-back to 80’s action flicks has its moments – most of them involving things blowing up in spectacular fashion – but in the end, comes over a wasted opportunity, and largely… Well, expendable. Mercenary Barney Ross (Stallone) and his lieutenant Lee Christmas (Statham) head to the Caribbean island of Vilena to scout out a mission to overthrow the brutal dictator in charge. Their reconnaissance goes wrong, though they do find out that rogue CIA operative James Munroe (Roberts) is the power behind the throne. After initially rejecting the mission, Ross decides to go back alone. Naturally, the rest of the team aren’t having anything to do with that, and the dirty half-dozen taken on the entire army of a nation (albeit a very small, largely ineffective one).

Given the array of talent on view, I expect more from the action scenes. While they seem to be well-enough staged, they are both shot and edited in such a fashion as to render them almost incomprehensible. A lot of the personnel choices, not least the ‘special surprise guests,” comes over as stunt casting, shoehorned in to the film for no apparent purpose. And if this is a throwback to the 80’s, why are there no cheesily quotable one-liners, surely among the most essential elements? Stallone does still look pretty good, given you are looking at a man who is almost eligible for an old-age pension, and Statham provides solid support. However, there’s nothing here that will stick in the brain, and the overall result is less a homage to the classics which preceded it, than a pale imitation.