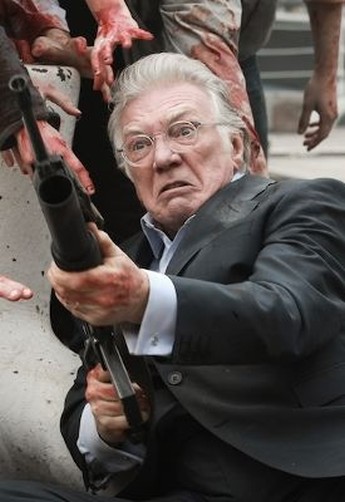 The basic concept is simplistic, crappily high-concept and completely summarized in the title, which is the most obvious since Snakes on a Plane – an entirely artificial mash-up of Lock, Stock, Attack the Block and Shaun of the Dead, largely without the wit or charm. However, it is carried out with enough energy to paper over the obvious flaws and, possibly, become a guilty pleasure. Much of this is down to Ford, as Ray Macguire, the grandfather of the two central characters, Andy and Terry (Treadaway and Hardiker). They’re planning a bank robbery so Grandad won’t have to move away when his old folks’ home is demolished by developers, but the alarm brings the cops down in force. Fortunately – or not – the resulting siege comes to a sudden end when an opened plague pit unleashes an expanding army of zombies across the East End of London. Andy, Terry, cousin Katy (Ryan), the insane Mental Mickey and their hostages head across infested London (and this time it’s zombies, rather than the usual tourists) to rescue Ray, who is holed up with his senior citizen buddies.

If they’d stuck with the OAPs, this would likely have been gloriously subversive, pitting the undead against the near-deads – such as when we see Richard Briers, in a Zimmer frame, trying to escape a zombie who is moving at basically the same speed. Or Honor Blackman – now 87, but evoking memories of Cathy Gale or Pussy Galore, as she lets rip with an automatic weapon. And Ford is perhaps the best of them all, foul-mouthed and feisty as he quickly grasps the situation and orchestrates his wrinkly colleagues. Shame the youngsters largely lack the charisma, though Ryan, and Ashley Thomas as Mickey, have their moments. The gore is plentiful and generally well done, and the pacing isn’t bad either: there’s enough awareness of the genre to both follow and play with its conventions. While the end result falls short of the obvious inspirations, this is at its best when going off that track and delivering its own ideas, like West Ham zombies fighting with Millwall zombies, a concept for which anyone outside the UK will need an explanation. This kind of quintessentially Britishness allows the makers to get away with no more than a warning as to their future conduct.