There wasn’t exactly an open ending at the end of The Prophecy, but its decent box-office success meant a sequel was inevitable – albeit direct to video, rather than theatrical. Outside of Walken, it’s an almost entirely new cast. Most of the other characters are new too, and recast if not. Detective Thomas Daggett, for example, became a monk and is now  played by Bruce Abbott of Re-Animator fame. But very wise of the studio to bring Gabriel (Walken) back, despite having his heart torn out by Lucifer. The excuse is that the Devil has had enough of him in Hell, and tosses the angel out, like a bad room-mate. 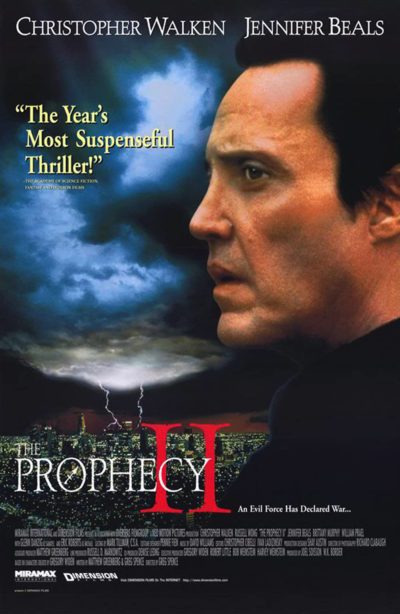 Back on Earth, angel Danyael (Wong) seduces and knocks up nurse Valerie (Beals). The resulting crossbreed, known as a Nephilim – pauses to remember a second-tier Goth group of the eighties – is a marker pointing towards the end of the war in Heaven. So Gabriel intends to track down its mother and prevent it being born. Basically, this is The Terminator with wings. To that end, because Gabriel still has issues with the modern world, he recruits failed suicide Izzy (Murphy), to drive and work computers. I dunno, you’d think anyone who had hung out with Satan, would be very familiar with Microsoft products. After chasing Valerie around for much of the film, things come to a head in a battle in what was once Eden – now, apparently a suburb of Blade Runner.

There are a number of familiar faces here, albeit lower-tier ones, and that helps elevate proceedings. In addition to the above, there is Eric Roberts, Glenn Danzig (nobody mention Verotika…) and some guy we recognized from Buffy, who it turns out, also wrote the last two movies in the Hunger Games franchise. Who knew? The Gabriel/Izzy interaction is also a pleasure to watch. While there was a similar sidekick character to her in the first film, we didn’t see the relationship from the beginning, so it felt less complete. But again, this is Walken’s world, and the rest of us are just orbiting him. It does seem more conventional in terms of lore, with the man upstairs taking a less passive role, and no need to invent entire additional books of the Bible, unlike its predecessor.

The cheapness does sometimes break through. Most obviously, the scene where Danyael proves his angeliciousness to Valerie, unfurling his wings. It’s almost entirely played out in her reaction shots. And, for someone supposedly 4-6 months pregnant, Valerie is a remarkably active preggo: running, climbing fences and leaping off buildings. I guess half-angel foetuses are made of sturdy stock. Beals may be the film’s weakest ingredient; she seems to think making a blank expression, with her lips slightly parted, passes for dramatic acting. Leave that to Chris, please. Still, when I first saw this, I was singularly unimpressed, but now, it’s by no means bad. At least, by the standards of mid-nineties straight to video movies, anyway. Don’t get your hopes up too high.