This is a film about religion, rather than a religious film. That may seem a meaningless distinction, but it does actually matter. Here, there is no need for a buy-in from the audience to a particular theology. In religious films, such as Left Behind or The Omega Code, it’s very much the case that they are literally preaching to the converted. While they can still be entertaining (for a variety of reasons) to non-believers, the central tenet of that kind of film, is that the viewer already shares its faith. Here, the reverse is probably the case. I suspect Christians, especially of the more fundamentalist kind, might be a bit miffed at the heretical (if not blasphemous) notions which go into the plot. 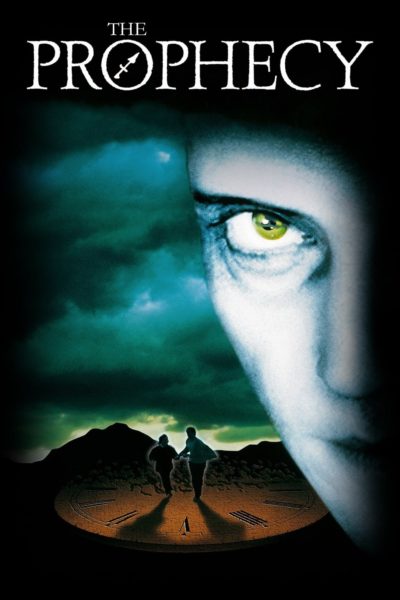 In particular, the idea that angels would abandon serving God, and go to war with each other for their own ends. Here, the two sides are led by Simon (Stoltz) and Gabriel (Walken), who are battling over control of a particular human soul. While, interestingly, Jesus and God seem to prefer to stay out of this particular conflict, that’s not the case for Lucifer (Viggo Mortensen, after Sean Penn had to drop out very late), who has his own reasons for picking a side. Pity any poor humans who happen to get in the way: in particular, police detective Thomas Dagget (Koteas), who almost became a priest before a crisis of faith, not dissimilar the one being suffered by Gabriel; and schoolteacher Katherine (Madsen), who gets involved because the soul in question ends up embedded in one of her pupils.

It has easily been twenty years since I saw this, and about all I could remember was Walken’s angel touching people’s faces and sending them to sleep with a “Ssh!’. That is, still, the coolest thing here, though in general he is absolutely perfect casting as a disgruntled angel. In the early nineties – I’d say from King of New York through to Nick of Time – he was unstoppable, and we are basically at Peak Walken here. Though most of the cast inhabit their roles effectively, at least for the ethereal characters. Koteas and Madsen are perhaps less impressive; that’s as much a result of Widen’s script which largely reduces humanity to what Gabriel calls “talking monkeys”. The lobbing in of native American culture also seems a bit out of place.

While he had written the scripts for Highlander and Backdraft (you can perhaps see the former’s influence, in the idea of immortals battling around a largely oblivious humanity), this was his debut as a feature director. He said he was inspired by a Sam Shepard monologue about an angel that had fallen to earth, and he embraced the “alien” aspects: “Their life and what concerns them is just outside our frame of reference”. Until the end, it’s fairly restrained in terms of spectacle, which is likely for the best. The optical effects have not aged well, though given the budget at the time, according to Widen, was only $2.8 million, they perhaps weren’t all that to begin with. But it does largely live up to Widen’s tongue-in-cheek working title: Scared Shitless by an Angel.