While author Dennis Wheatley is best known for his novels of the occult, his bibliography covers a much broader range of genres. In particular, he wrote a slew of espionage thrillers – his Gregory Sallust series was one of the main inspirations for James Bond – but also produced historical fiction and adventure stories. This was based on one of the latter, his 1938 novel Uncharted Seas. Hammer bought the rights just before their other Wheatley adaptation, The Devil Rides Out went into production, though this was considerably more expensive, costing close to twice as much. A good chunk of that went on the construction of a 175,000 gallon water-tank at Elsmere Studios, to simulate the Atlantic Ocean. Matters weren’t helped by original director Leslie Norman getting fired early in shooting. Carreras took over, but even he had to fend off his own father, studio head James, who threatened to shut down the production as costs escalated. Having seen the finished product, I’m on James’s side.

The title change is wholly inaccurate. Well, I guess it could be said the continent remains “lost”, because there’s little or no sign of it in this movie. Most of it takes place in a seaweed infested, becalmed area, into which the unlucky S.S. Corita strays, with Captain Larson (Porter) at the helm, on its way from Freetown to Caracas. It seems that just about every passenger is harbouring a dark secret of some kind or another. It’s less a boat, than a floating soap-opera, packed with angst, bickering and sexual tension. Heck, even the good Cap’n has agreed to ship a dangerous cargo of chemicals, which explode on contact with water. A unfortunately timed hurricane makes matters worse, and forces the ship to be abandoned, on the edge of going all Giant Fireball. Though, bizarrely, after drifting about for a bit, they end up back on the Corita, and the whole “dangerous chemicals” thing inexplicably ceases to be a threat the rest of the way. 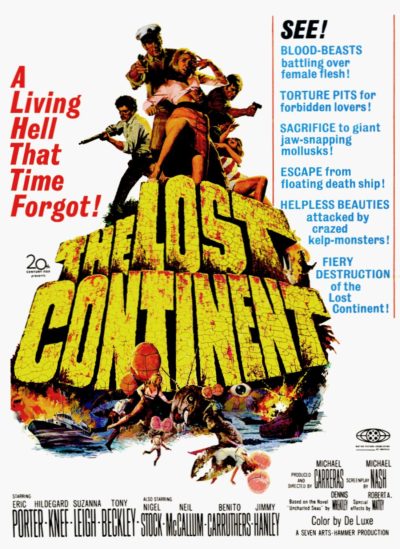 However, in its place are no shortage of other threats, beginning with the seaweed itself, which proves to be a bit bitey. There’s also a killer octopus. Then native totty Sarah (Dana Gillespie) shows up, in what must be one of the most memorable entrances in Hammer history. Just not in a good way. For she is walking across the kelp with over-sized “snowshoes” – and also has two giant balloons attached to her shoulders. Let’s just say, she doesn’t appear in need of artificial flotation devices either, if you know what I mean, and I think you do… Gillespie later said, “I went in and sat up the back to watch it and, the moment when I come on with these balloons on my shoulders, the whole audience fell about with laughter. Then I realized there’s no point ever being taken seriously in the film world.” Being taken seriously is not something this film is at risk of, it must be said.

Sarah is being chased by a pack of similarly-attired locals, who storm the boat, though this looks like nothing more than an assault by disgruntled party guests. Turns out they are part of a group of lost Spanish conquistadors, whose galleon got stuck in the seaweed, and have established an independent settlement, surviving by preying on other ships that have the misfortune to suffer similarly. They’re ruled by a boy king, though the real power behind the throne is a masked, Grand Inquisitor-like figure. Or maybe the bizarre, tentacled orifice thing kept in a pit – one of the occasions where there’s definitely a bit of a Lovecraftian vibe seeping through. This eventually sets up the final battle between Larson’s crew and the Spaniards. Though not before the former get attacked by a giant crab-like monster, and are only saved by the fortuitous arrival of an equally large scorpion, apparently the crab’s mortal enemy. The resulting battle is considerably less impressive than it sounds on the page, because the model effects for both are almost entirely woeful. 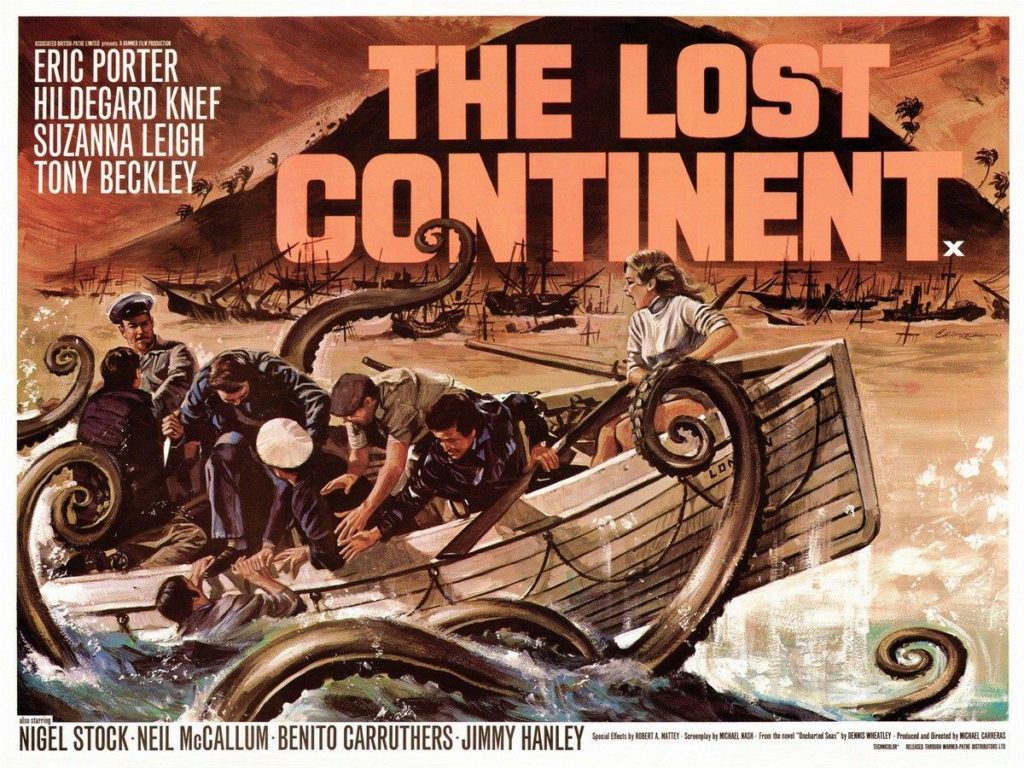 I felt the main problem is pacing, with a script which takes far too long to get to anything even approaching the film’s title. The final 30 minutes are then pretty much one long, run-on sentence of “…and then this happens,” as we gallop towards a conclusion which is far from conclusive. Most of the passengers are more or less unpleasant people, making it difficult to care about their fate. The early going sees a lot of storylines set up which prove to be entirely pointless, such as the two million dollars worth of bearer bonds held by Eva Peters (Knef). I think I would probably have enjoyed this more, if they had dispensed with these irrelevancies, and spent considerably less time becalmed in kelp before getting to the meat of the movie. Spending money on other aspects apart from a giant water-tank would have helped as well.

Much as in The Vengeance of She, matters are not helped by a bizarrely inappropriate opening credits song, here performed by The Peddlars, with lyrics such as, “I have discovered… the lost cont-TEE-nent…” Hey, I guess it makes about as much sense as the rest of the film. The best thing you can say about this production is, some of the photography is well done, with filters used to give everything a sickly pallour, that is appropriate and, again, enhances the Lovecraft vibe. For some reason, the BBFC saw fit to give this an “X” rating, which seems unduly harsh; there’s hardly anything here to merit that, beyond some bad attitudes (and a lot of drinking, it has to be said!). I wish Hammer had embraced that adult rating, or even the lunacy of the second half, and explored the concept of a lost tribe of conquistadors, living for centuries out of contact with civilization. As it, the gulf has rarely been bigger, between the lurid delights promised by the text on the US poster, and the underwhelming mediocrity of this production.