When I put this on, Chris’s first question was “Why aren’t we watching Skyline first?” I had to explain to her that we had, in fact, already seen it. While this was, admittedly, close to seven years ago, it does go to show how little of an impact it made on her. And, in the event that we ever get round to watching the third entry in the series, Skylines, I fully expect to be fielding the question, “Why aren’t we watching Beyond Skyline first?”, because I don’t see this one sticking in the mind to any significantly greater degree. Admittedly, it did fix the issue with its predecessor, a story-line which I sad was “not so much thin, as anorexic.” If anything though, the problem has now gone too far the other way. There’s enough going on here for three or four movies; the film just needs to commit to one of them. 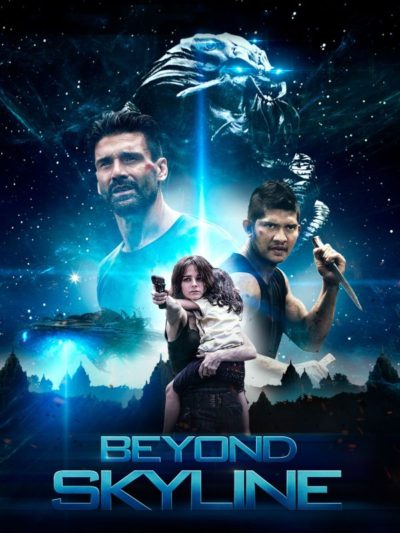 It seems to take place in parallel to the events of the earlier movie, with an alien invasion of Earth, and in particular, Los Angeles. The hero here is detective Mark Conley (Grillo, perfect for a live-action Duke Nukem), who is on the subway with his delinquent son (Weston) when shit kicks off. Film A sees them, and a group of other citizens, struggling through the increasingly blasted cityscape, before they get sucked up into the alien craft, in a way shamelessly ripped-off from War of the Worlds. Film B then begins, best described as “Die Hard on an alien spaceship,” with Conley and his Gun Of Infinite Ammo running about, looking for his son. Eventually, the film gets bored of this too, and the spaceship crashes to Earth in the Laos jungle. Conley survives despite no more protection than saying, “Hold on!” – albeit in a firm tone of voice.  Film C takes over, in which  a plucky band of humans come up with a way of defeating the alien invasion in ridiculously short order. And we finish with Film D, where the movie suddenly goes all kaiju, and has giant creatures battling each other around a temple complex.

I’d not have minded watching any of them, with A and D particularly cool to look at. Any of them certainly would seem to have scope for greater exploration, and have been capable of sustaining a whole feature. But when a film apparently loses interest in its story, and feels the need to re-invent itself at twenty-minute intervals, it doesn’t create a lot of confidence in the viewer. Admittedly, the scripting here is pretty basic at best, making Independence Day resemble a work by Christopher Nolan. The characters never get above walking cliches, and I lost track of the number of derisive snorts I issued over the course of proceedings. Though as in the first film, the eye-candy proved sufficiently nutritious to stave off starvation. I was left with a deep appreciation for how decent Battle: Los Angeles actually was.