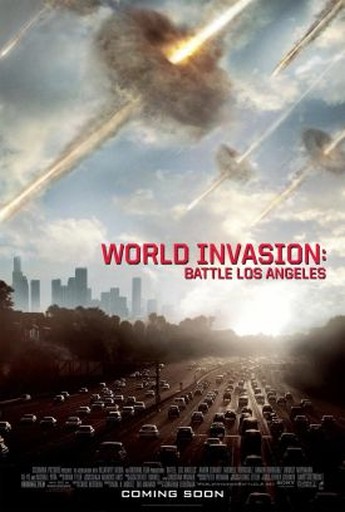 Randomly researching, I came across Roger Ebert’s review. While I don’t necessarily agree with Ebert e.g. his zero star review of The Hitcher [no, the original…], I do generally respect his arguments. But this one is just a terrible review. Here are some key quotes: “Battle: Los Angeles is noisy, violent, ugly and stupid… When I think of the elegant construction of something like Gunfight at the OK Corral, I want to rend the hair from my head and weep bitter tears of despair… Young men: If you attend this crap with friends who admire it, tactfully inform them they are idiots.” If I ever sink to that level of criticism, please shoot me. I mean, I hate Twilight with the intensity of a million suns, but there are people – intelligent ones – who like it. I’m perfectly fine with thus, and would never label them “idiots” for doing so. And comparing the style of a modern SF-action film to a Western made more than fifty years previously? That’s like reviewing Transformers 3 and saying, “Well, it’s no Train Pulling into a Station.” As for “noisy, violent, ugly and stupid”…

Why, yes: yes, it is. Your point being? It’s about a bunch of Marines fighting an alien invasion, f’heaven’s sake. What do you expect, Roger? My Dinner With Andre? This is a film with few pretensions, or any ambition to be other than a dumb flick about… Well, y’know. On this basis, it succeeds enormously. Sure, you can criticize the characters for being shallow, from Sgt. Michael Nantz (Eckhart), the trouble veteran on the edge of retirement, to rookie officer 2nd. Lt William Martinez (Rodriguez). Yet to do so would be like criticizing OK Corral because it doesn’t have monsters in it: missing the point entirely. This is cinema as spectacle, and from a technical point of view, succeeds admirably. Sure, be nice if every film could combine action and drama perfectly, like Die Hard or Aliens. That won’t happen, and I’d rather movies concentrated on whatever they do well – be that witty dialogue or, as here, blowing shit up real good – rather than making half-assed efforts to please people like Ebert. I am, however, impressed he still managed to review the film, despite, on the basis of his article, having his head stuffed up his arse at the time. Really: I expected better and am sadly disappointed from him; quite the opposite of what happened with the movie.