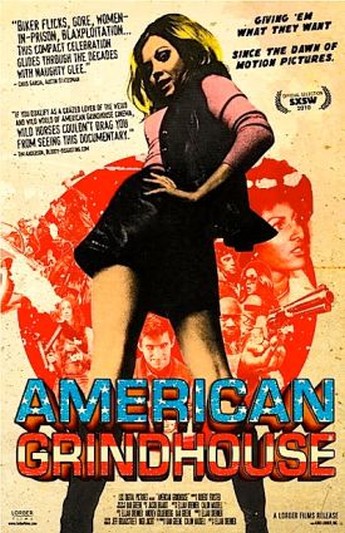 This documentary traces the history of American exploitation cinema, from more or less the beginnings of film as a medium, through the Hays code era and up into the heyday of Times Square. It includes interviews with many familiar names involved in produci, including John Landis, Joe Dante, Jack Hill and Herschell Gordon Lewis, as well as a number of authors and experts on the topic. It’s divided into a number of section, covering different periods or genres, e.g. Blaxploitation, teen movies or women-in-prison flicks; some could likely have benefited from further expansion. There’s a huge selection of clippage to accompany the talking heads, ranging from 1896’s Interrupted Lovers, produced by Thomas Edison’s company, through to Piranha in 1978. Though with the exception of a token entry or two, it appears to proclaim the end of “grindhouse” at about the end of the seventies, with Jaws signalling the absorption of grindhouse by the major studios, which seems a dubious claim, save in the sense of the physical buildings themselves. For the genre simply re-invented itself for home video, and more recently, cable; it’s simply cinema ‘outside the norm’.

Aside from this premature ending, there’s a lot of good stuff here, particularly with regard to the road-show era of exploitation, when pseudo-educational films like Mom & Dad would barnstorm their way around the country. While much of the information provided, especially on the later periods, is likely familiar to cult fans [I had fun shouting names at the screen, as predictions of who they’d talk to next!], the interviewees are great fun to listen to. Stand-outs include John Landis, who seems genuinely to enjoy discussing this aspect of cinema – though I’d argue with the claim that The Passion of the Christ is the only grindhouse movie of late – and Don Edmonds, director of Ilsa, She-wolf of the SS, who talks about his decision to go full-throttle into the film, despite his qualms. If it barely scratches the surface of the subject, that’s likely inevitable at a crisp 80 minutes; almost every topic covered could have merited that length, by itself. But even fans of the genre like ourselves, at the very least, should come away with a laundry-list of movies to track down: