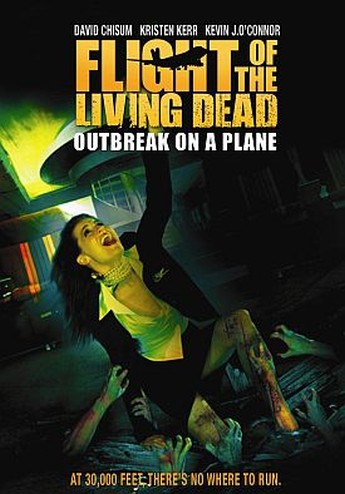 I was stunned to discover that this was not a case of title first, concept second, everything else a long way back in third. Originally, this was called Plane Dead, but whichever marketing genius came up with the new title deserves a raise, since we’d never have watched it under its original name. And would probably have been all the better, since the title is easily the best thing about the movie. It’s not a bad concept, admittedly. Infectious scientific experiment in the hold of a Transatlantic flight breaks out: gnawing ensues. However, the execution is awful on just about every level. The characters appear to have strayed in from Airplane!; horny teenagers, a Tiger Woods knock-off, and there’s even, without any trace of irony, a nun [sadly, she does not break into song]. The plane itself appears to be made of adamantium, going by the number of bullets and explosions the fuselage takes without the tiniest hint of decompression – though one burst and all the comms are knocked out. Some zombies die of chest-wounds, others need head-shots. And the floor in a plane is apparently carpet over a pit, while there is a passage behind the bathroom mirror. This is the level of plotting you can expect here, folks: never mind undead, I doubt the scriptwriters have ever been an an actual aircraft.

In the film’s defense, it was actually in production under its previous name around the same time as a certain Samuel L. Jackson movie. Though matters would probably have been improved had the Woods-alike yelled, “I want these mutherfuckin’ zombies off this mutherfuckin’ plane,” and if it can’t be accused of being a rip-off, being boring is probably a greater cinematic sin in our eyes. Things do perk up in the final third, when the characters stop flapping their lips and get down to the serious business. There’s one particularly nice kill involving an umbrella; I’m sure I’ve seen something like it before, but my Googling just gets me a lot of info on the Resident Evil films, for obvious reasons, so we’ll give it a pass. The nun’s demise is also somewhat amusing. But the film takes far too long to get there, and while I don’t exactly demand impeccable logic in movies about reanimated corpses, the holes in this one are big enough to fly a 747 through.