Probably not quite what you’d expect from a movie starring Adkins and Lundgren. While their characters do go toe-to-toe near the end, the fight reflects that there’s nothing in either man’s background to indicate they have particular skills. For Adkins plays cryptozoologist Travis Preston, and Lundgren is big-game hunter Harker. The former seeks to protect undiscovered species, the latter to mount their heads on his wall. The pair have crossed swords in the past, and do so again here, this time in China. There, a giant amphibian has been causing havoc at the site of a large-scale government project, and both men go to investigate. Harker has the official, inside track, but Preston has morality on his side. 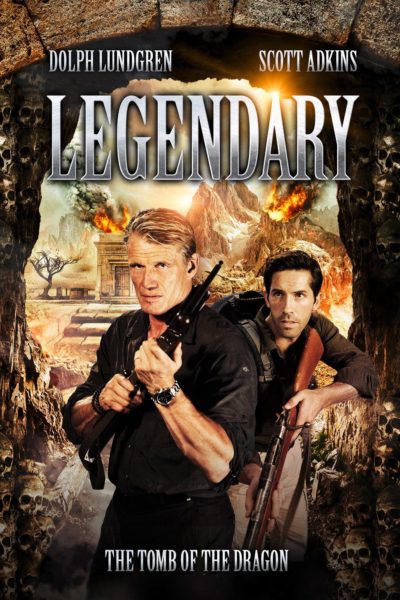 There are almost no surprises in the script, which unfolds exactly as you would probably expect. Minor characters get eaten, as Preston and his team seek to find out what the creature is, and how it can be handled in a non-lethal manner. Meanwhile, Harker has no such qualms, and simply wants to introduce it to the business end of an elephant gun, while generally being a dick about it. It all feels a bit like Lake Placid, though without the blisteringly acerbic dialogue. Equally inevitably, it ends with both teams going into the caverns where the creature makes its home. Maybe a non-minor character gets eaten. Or maybe they don’t. Hey, I don’t want to spoil what little the script holds in the way of surprises.

However, for what it is, it’s not actually bad. Adkins was originally intended for the villain’s role; I think it’s a happy accident he didn’t get it, as the casting here works out quite nicely. If they can’t bring their more physical talents to proceedings, both he and Lundgren still get to flex their charisma to decent effect. Not much of a spoiler to say the monster – which looks… just about okay given the budget – is a giant salamander. Interestingly, this is something which has been suggested as a possible explanation for Nessie. And, in a weird case of life imitating art, six years later, video footage of a salamander-like creature swimming near a Chinese dam project went viral. Or maybe the marketing for the movie was inexplicably delayed.

This is largely a case of managing your expectations. I had read enough reviews of this going in, that the lack of martial arts didn’t come as a surprise, and so wasn’t a disappointment. With that handled, even though this does occasionally feel like a SyFy original movie, it would class as one from the top shelf. The Chinese locations add punch to the production values, and cinematographer Shu Yang brings plenty of experience behind the lens. That Adkins is at least somewhat credible as a scientist – even if it’s perhaps more Action Man: Science Edition – is evidence the man can act, and it’s never a waste of time to see Lundgren playing a bad guy.