We reach a new low-water mark here for Hammer, with this nearly unwatchable and tedious pseudo-sequel to She. The original was no great shakes. But it was watchable enough, mostly because it had Cushing, Lee, Bernard Cribbins and Ursula Andress. None are present here, and are sadly missed. This feels more like a bad knock-off than a sequel, as if The Asylum had made a mockbuster of the original movie.

It’s the story of Carol (Berova), a young girl who, as the film begins, is staggering about the South of France, killing sleazy truck drivers with her telekinetic powers. Unlike its predecessor, it takes place in the present day. Or at least, a present where you can swim out to a random yacht, and if you are suitably photogenic, they’ll clothe, feed and water you, no real questions asked. Even if you then leap overboard because the ship isn’t going where you want, and cause the death of the boat’s owner. She is tormented by visions, drawing her across the world to the lost city of Kuma, where everyone speaks unaccented English. This attraction is because she is the reincarnation of its queen Ayesha. Or possessed by her spirit. The film is vague on the specifics. 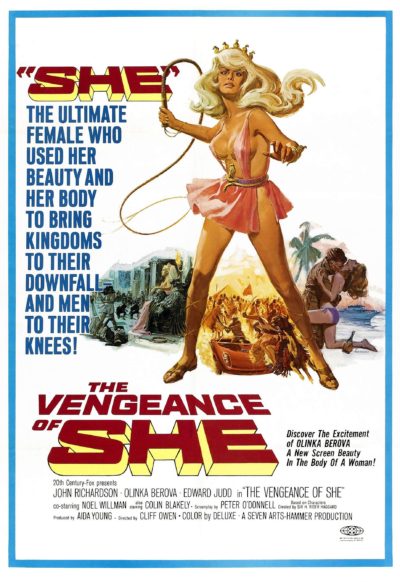 Much as in the original, there is a power struggle in the lost city between church and state, represented by priest Men-Hari (Godfrey) and king Kallikrates (Richardson). Carol has also been followed to Kuma by psychiatrist Dr. Phillip Smith (Judd), who gets involved in palace politics and incites a revolt. There’s a sacred flame conveying immortality, which Men-Hari wants, but needs Ayesha’s permission, and so has been mind-controlling her to that end. It’s a bit crap as mind-control goes, considering seconds of chat from Dr. Smith is enough to deprogram her. Kallikrates is sad to discover Carol isn’t Ayesha, kills himself and the city explodes. As lost cities do.

This was originally intended as another vehicle for Andress, with pre-production starting a mere three months after the completion of She. However, the second film of her two-picture deal with Seven Arts was instead Once Before I Die, a war drama directed by then husband John Derek. She declined to reprise her portrayal of Ayesha, and plans for Susan Denberg also fell through, so Berova (real name Olga Schoberová) got her only English language starring role. Co-star Judd was unimpressed: “Olinka wasn’t an actress. I don’t know what she was. Perhaps she was a model. I figured she was making it with somebody behind the scenes… Olinka had a physical resemblance to Ursula, except that Ursula could act a bit.”

He’s not wrong. While Berova has some presence, as soon as she opens her mouth, you’ll be longing for the Oscar-calibre (relatively) acting talents of Andress. Not that Judd can talk, since the supporting cast behind the starlet is thoroughly unimpressive. But the main problem is a script that is a mix of elements rehashed from She, with aspects that are either nonsensical, or simply boring. The two halves of the story – the Kumans and the people from the yacht – don’t mesh at all until too late. To reach that point, we have to sit through copious quantities of wandering across the landscape and tedious religious ceremonies. Failing to help matters is the soundtrack, opening with a thoroughly dreadful song, whose lyrics I reproduced below:

Oh, who is she? A misty memory?
A haunting face? Is she a lost embrace?
Am I in love with just a theme?
Or is Ayesha just a dream?
A mystery?

Oh, who is she? I call her name,
Across an endless plain.
She’ll answer me, wherever she may be.
Somewhere across the sea of time
A love immortal such as mine
Will come to me, eternally.
Immortal she, return to me…

It then moves on to make flagrant overuse of Tubby Hayes’s sax noodling. A couple of months later, Hayes would be arrested for heroin possession. I’m not saying the movie drove him to drugs, but… 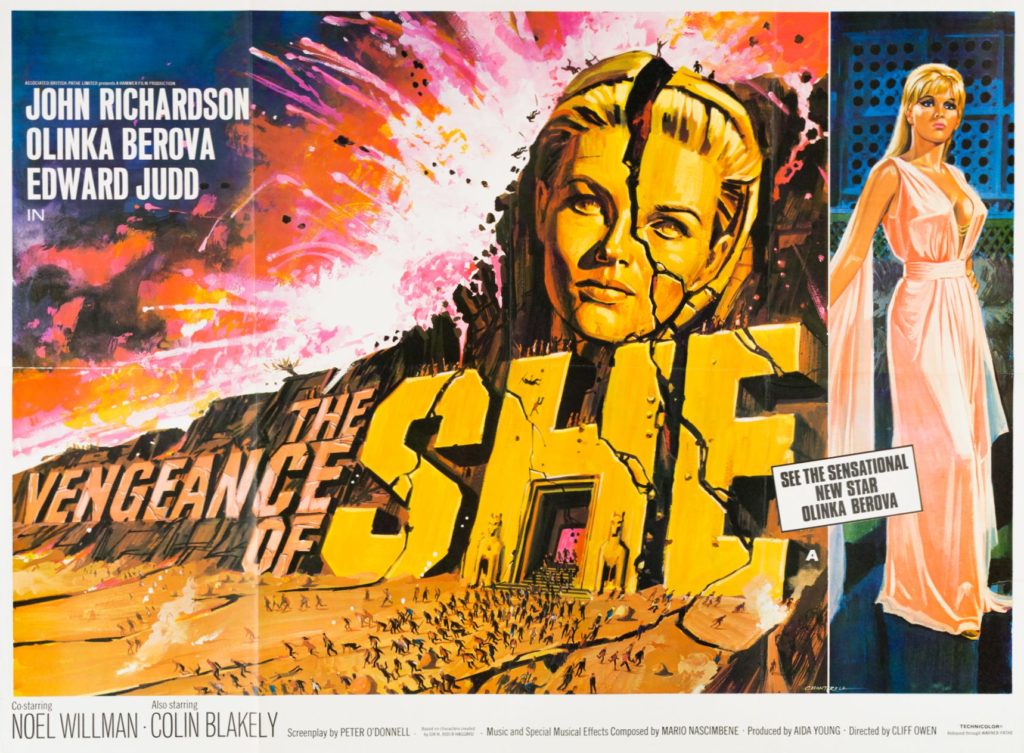 Here’s the tag-line from the poster: “The ultimate female who used her beauty and her body to bring kingdoms to their downfall and men to their knees!” No, in just about every conceivable way – though that would probably have been a much better movie. Carol is actually almost entirely passive, being manipulated throughout by the male characters, in particular Men-Hari. Certainly not the strong ruler personified by Andress. I guess I can understand Kallikrates’s massive disappointment when he finds out she is actually Carol, some kind of Swedish temp on holiday. Though Swedish Temps on Holiday would probably have been a much better movie too.

[Original review] The good thing about Hammer, is that their films usually satisfied on some level; if the plot was hokey or ludicrous, the performances were solid enough to sustain interest. Or if both left something to be desired – often the case in their later work, especially – the sex ‘n’ violence was ramped up to compensate. Vengeance, however, fails miserably on all levels: it’s one of those films which seems to suck the oxygen out of a room by its mere presence. Berova is the supposed incarnation of Ayesha, queen of a lost city, who is drawn around the world to her destiny.

The story – by Modesty Blaise creator, Peter O’Donnell – leaves much to be desired, requiring vast leaps of credulity, when it isn’t being extremely tedious. Berova shows no detectable talent whatsoever; sources say she was subsequently deported from Britain, supposedly for being a Czech spy, but I think someone at the Home Office just saw her performance here. Add in the awful saxophone soundtrack, and you have a real stinker, with about the only plus point, seeing Hammer actually film outside the British Isles. There’s no actual “vengeance”, and we don’t even get to the lost city until after half-way. The last twenty minutes are as if the makers suddenly realised what a dull movie they had, and crammed in a million plot threads to try and make up for the previous tedium. It doesn’t work. E+