This feels in a number of ways like it could have been a Hammer movie from around the same time. Firstly, it takes place in a vaguely middle European location, though it may be set in the province of Stockfootagesylvania – hard to tell quite how far production wandered from Spain. The era is equally vague: while it looks mostly contemporary, there’s one character who tools about in a horse and carriage. There’s also a mob of villagers armed with torches and pitchforks, who feel very mid-19th century. The hero is one of those blandly attractive actors Hammer threw at the screen, and there’s a professor’s role, which seems tailor-made for Peter Cushing.

Particularly redolent though, is the girls’ school setting: most obviously used in Lust For a Vampire , and also a location in Brides of Dracula. The ones here are, however, particularly unconvincing schoolgirls, in both syllables of the word. We never see them engage in any actual educational activities, unless (to borrow a line from my Lust review),  they are taking classes in advanced “Flouncing around in flimsy robes.” They instead spend their time lounging by the pool, or taking communal baths As for the “girl” part, I’d wager none will see twenty again. This may be no bad thing. It reduces the creep factor, given hero Kendall, at whom they make moist eyes, was in his later thirties at the time. 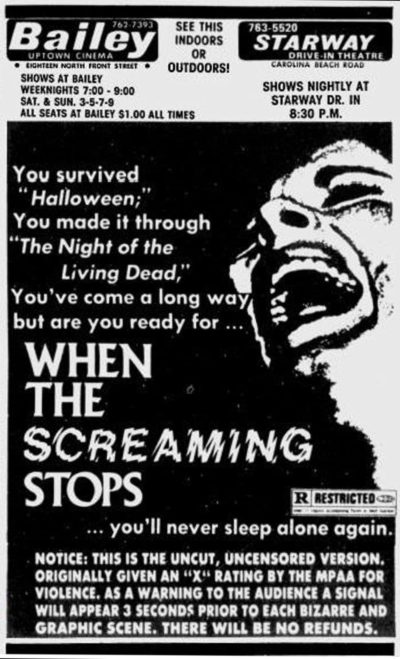 To the plot! The town is plagued by terrible murders, in which young women are having those flimsy robes torn off, and their hearts tipped out by a creature which looks at least adjacent to the black lagoon, if not quite from it. The school is concerned and so is assigned local hunter Sigurd (Kendall) for a guard, much to the concern of teacher Elke Ackerman (Tortosa). She’s not wrong, in that Sigurd is a bit crap as security goes. Instead of guarding, he spends half his time staring into the windows of the pupils’ bedrooms, and the other half roaming the marshes, after spotting the Very Lovely Loreley (Liné) in her fringed bikini there. Might she and her taciturn man-servant be connected to the murders?

Well, you’ll probably be there well before Sigurd is. He learns a bit of the local lore of the Loreley – yes, that’s how the film spells it – from a local blind musician, though the song he sings sounds suspiciously like Tomorrow Belongs To Me. The creature puts the violinist on its “to-do” list for his pains. Next up is Prof. Von Lander (Menéndez), who delivers some pseudo-science about the power of moonlight to re-animate dead tissue, and helpfully has in his possession an irradiated dagger that can reverse the process. The monster naturally pops round for a cup of tea, or failing that, the Prof’s beating heart, torn from his chest.

Eventually, Sigurd comes to realize the woman with whom he is obsessed is one and the same as the creature, and that he’s better off with Fraulein Ackerman, who is less likely to become an organ-ripping amphibious fiend. He goes diving in the river, locating the cave where she and her handmaidens live, but is hypnotized by Loreley and chained up, to become her forever pet. However, the handmaidens bicker over him, and the resulting catfight gives Sigurd a chance to escape. A block of explosives takes care of the underwater complex, and the professor’s dagger returns Loreley whence she came, though she vows they will be reunited in Valhalla. More of a threat than a promise, I’d say.

During the final decomposition, the creature first turns back into Loreley – her fringed bikini apparently regenerating as part of the transformation – then becomes a decayed corpse, with the bikini no longer anywhere to be seen. Mind you, the fashion choices on view here are generally a bit odd. When stalking the streets of the town, the beast wears a cloak. Because that’s an effective disguise for a giant, clawed reptile. Then there’s Sigurd’s fondness for white suits, apparently bought from the same tailor as Tony Manero, Though personally, I’d be more comfortable wearing something with a little additional room in the crotch department, shall we say.

de Ossorio is best known for his Blind Dead series, in which the Knights Templar were resurrected as zombies, a series which he began the previous year. There are some moments of similar style here, most obviously the slow-motion galloping (de Ossorio loves him some slo-mo). But the director made plenty of other movies during a career which lasted close to thirty years. This one is workmanlike without being particularly memorable. It certainly is only loosely connected to any German mythology, despite scattering words like “Wotan” and “Nibelung” about the script. There is a surprising amount of gore in the killings, even if the effects leave a bit to be desired, and there’s certainly no shortage of swimsuit-clad EuroTotty, so the whole film is easy on the eye.

However, Kendall is not particularly memorable as the hero, not least because his actions appear to be dictated more by the contents of those tight, white pants than his brain. As a result, the script needs to go from zero to “let’s blow up the underwater cave” with a speed which is far from convincing. If Von Lander had been there to provide helpful advice, that might have helped; instead, he’s disposed of after dropping knowledge about the irradiated dagger. Where it may fall most short of Hammer is in not making its female monster sympathetic. In Countess Dracula, you might not have agreed with the Countess’s murderous actions, yet you could see a motivation, as she struggled to hold onto her youth and beauty, the characteristics which define her. Here, Loreley kills because… of tradition, I guess? It’s just what she has always done. That leaves her little more than a monster, and consequently, there’s no emotional impact to her eventual defeat.