Despite the title, this is not a vampire film – at least, not in a traditional sense. It’s more a bit of semi-historical re-enactment, telling a version of the story of Countess Elizabeth Báthory. She was the medieval Hungarian noblewoman, who was walled up alive, after being accused of torturing and killing up to 650 young women. This take renames her as Elisabeth Nádasdy (Pitt), though one scene in the local pub does still refer to her as part of the Bathory family, and on the DVD commentary, Pitt says she played Bathory. We join proceedings just after the death of her husband. Those gathered for the reading of the will include long-time retainer Captain Dobi (Green), and Imre Toth (Elès), the handsome son of his military comrade, who quickly catches the elderly countess’s eye. Daughter Ilona (Lesley-Anne Down) is on the way too, but hasn’t arrived yet.

A domestic abuse incident with a maid results in blood spattering Elisabeth’s face. On cleaning it off, she realizes the skin beneath has reverted to a youthful state. Shall we say, there’s about eight pints more of this organic beauty product, where that came from. It’s not long before the Countess has emptied the bottle, and is back to her full-on prime. To explain away the transformation, Ilona gets kidnapped on her way home, and Elisabeth takes on the role of her daughter. Imre is smitten by the beautiful young woman, and the two begin a relationship. But there’s a problem. The effects of the all-natural lotion are only temporary, and when they wear off, Elisabeth becomes even older and uglier. 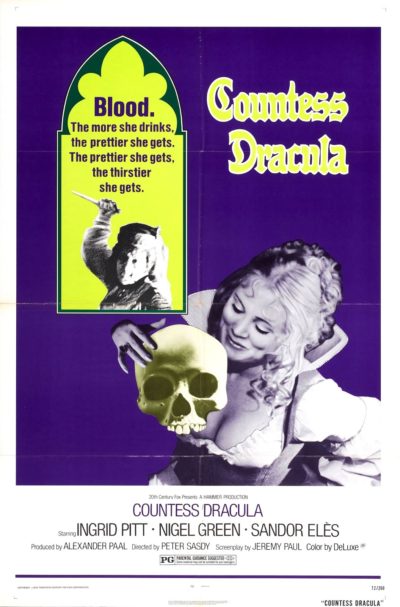 With the help of Dobi, who had hoped to marry the widow himself, further victims are procured. However, it turns out that not all blood is equal: only virgin blood does the trick. You’d think the obvious solution would be for Dobi to hang around outside the local elementary school – not least because nothing is ever said about the gender of the immaculate donors. However, the chosen ones are always female, and typically large-breasted, because Hammer. The mounting pile of (female, large-breasted) drained corpses eventually bring unwanted attention and dark whispers among the locals, as Imre’s marriage to the Countess approaches. A lock-in is imposed, and there’s only one remaining source of the elixir Elisabeth needs. Otherwise, she will be regressing to a geriatric form, something Imre is unlikely to appreciate, especially on his wedding night.

I’d say Pitt’s performance ranks among the best by an actress in Hammer history. That’s impressive, considering the others include Oscar winners Bette Davis and Joan Fontaine, as well as Tallulah Bankhead. The switches between the old and young versions of the Countess are not just the result of makeup, though Tom Smith’s work in this area is impressive. It feels almost like they are played by two different actresses, even if Pitt’s voice was dubbed by Olive Gregg in the released version, much to the actress’s chagrin. I can see her point. She had made plenty of movies without her accent being an issue (though Gregg supposedly dubbed some of her lines in The Vampire Lovers). If ever there was one where her Eastern European lilt was appropriate, it would be this. Perhaps Sasdy was annoyed that Diana Rigg supposedly turned the role down. The nekkid blood sponge-bath scene (top) may have been an issue.

Speaking of Sasdy, this has to be considered one of the more authentically Hungarian takes on the Countess Bathory legend. The director was born in Budapest, and was joined in the production by fellow Hungarians Elès and producer Alexander Paal. Studio head, Sir James Carreras reportedly said of his Hungarian director + producer, “They might cut each others’ throats, but at the end of it, hopefully I’ll have a movie.” However, outside of Pitt, there are not many familiar faces here. Sasdy’s background was mostly in British television. He instead pulled many of the character actors and crew over from that medium, and his experience helped him stretch the typically small budget. The film’s production values are also boosted by Hammer getting to use sets left over at Pinewood studio from Anne of a Thousand Days. That ended up being Oscar-nominated for its art direction, and may be why Countess looks more lavish than usual for the studio. 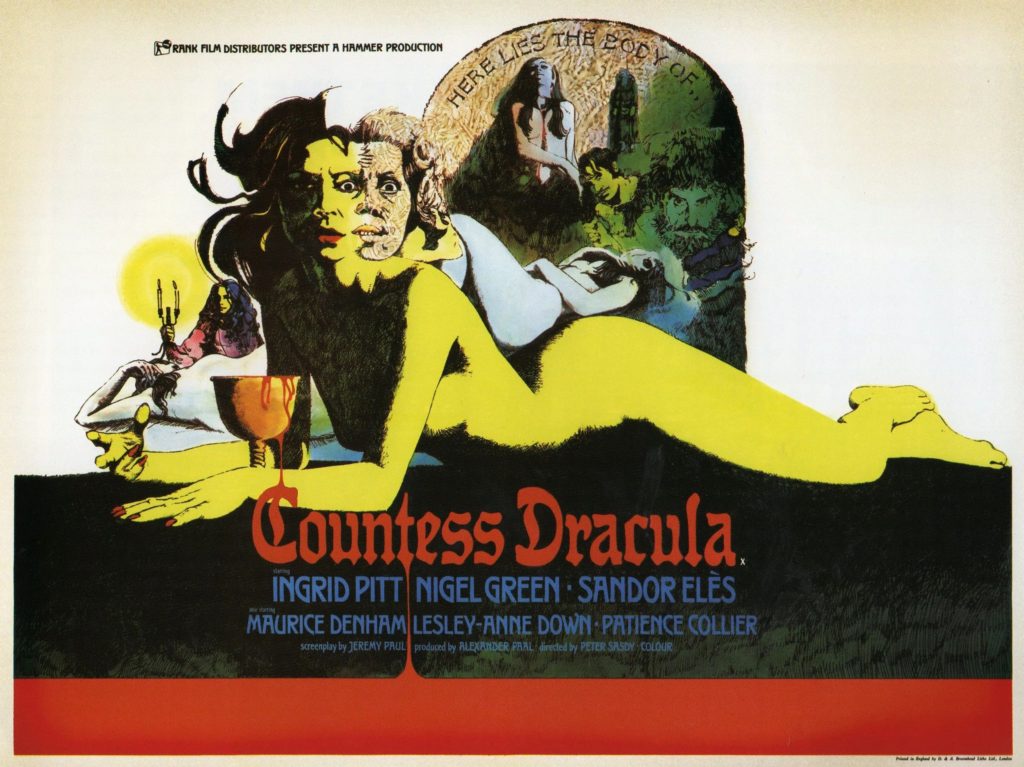 I did like the tragic feel to the story here. It is, at its heart, a doomed romance between the elderly Countess and the young soldier. The only way the pretense of her youth and beauty can be sustained is by unspeakable acts, in which Captain Dobi find himself entangled, due to his long unrequited love for Elisabeth. Meanwhile, Imre is blinded, to a truth which should be increasingly obvious, by his affection for “Ilona”, not realizing the real thing is being kept incommunicado [On this aspect, it does feels like there’s a scene missing, as the real Ilona jumps from being held in a cabin in the woods, to a chamber in the castle, without apparent explanation] Yet it’s clear Elisabeth and her allies don’t care about the lower classes on whom she preys. This is made clear by an early harsh scene in which her carriage literally drives over a peasant who is pleading for help.

There’s some irony here in Pitt’s subsequent career. While she’d never quite reach the heights of fame to which Hammer propelled her, she became something of a cult icon in the decades which followed. This was no doubt helped by her performance in The Wicker Man – not dubbed there. [Coincidentally, I write these words on May Day!] However, unlike the Countess, she grew old very gracefully, and was still impressively attractive into her seventies, before passing away in 2010. She leaves behind a small but impressive body of work, and an equally interesting life, which included her escape as an eight-year-old from Stutthof concentration camp in Germany. You can argue forever whether Pitt or Barbara Shelley should be considered the female “face of Hammer.” But I think Ingrid would get my vote.