Donal (O’Neill) is a farmer in rural Ireland, whose needs are simple, mostly revolving around his devotion to taking care of an elderly, housebound mother, Florence. But one night, he enters the house to find her savagely bludgeoned to death, for no apparent reason. On the day of her funeral, two men show up and attempt to make Donal “suicide” himself. He kills one, and discovers the other, Bartosz (Pawloski) was an unwilling participant. Bartosz’s sister, Kaja, was being held captive as part of a sex trafficking ring, and used as leverage to make him take part in the murder attempt of Donal. He knows nothing of Florence’s murder. But he knows a man who might. 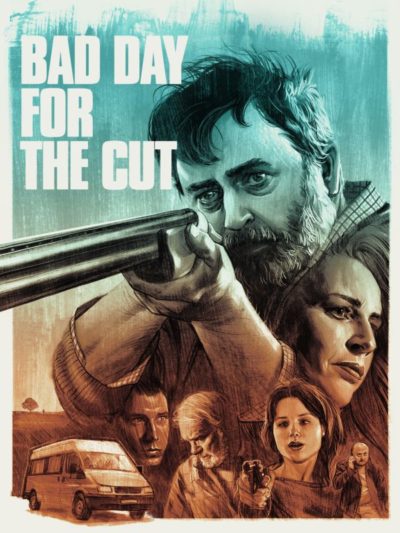 Thereafter, it’s Donal and Bartosz on their twin missions: respectively, finding out who was responsible for the death of Florence and why; and rescuing Kaja from her enforced life of prostitution. Both bring them into the circle of Frankie Pierce (Lynch), a woman who runs the local crime world, with a ferocious temper, and her long-suffering second in command, Trevor (Graham). It’s a world with which Donal is entirely unfamiliar, and for which he is obviously unsuited. On the other hand, the murder of his mother has left him with a single-minded dedication to the task at hand. That, plus a comfort with his double-barrel shotgun – even if it has previously only been used for hunting rabbits – will go a long way on his mission of revenge.

I liked the fact that Donal is no professional, just a very determined amateur. As such, things don’t necessarily go as he wants. However, I will confess to having lost most interest in proceedings by the time the motivation for his mother’s death was eventually revealed. I had a sense of “Is that it?” as well, because the justification made considerable more sense in cinematic terms – for the purpose of getting the story where it needed to be – than it did for the characters. It’s a shame, as the individual characters are well-drawn and memorable. O’Neill and Lynch probably make the best impression, with the latter in particular a foul-mouthed and hyper-violent psychopath, well suited for a life of sex trafficking and brutality.

There are a couple of stabs at dark humour, which I didn’t feel worked well. It seemed as if Baugh was going for a Guy Ritchie-esque approach at these points, such as the attempt at “suiciding” Donal being foiled by an excess of rope. This is the first time he directly encounters his enemies, and it set a tone of incompetence which perhaps weakened the perception of them as a threat. Thereafter, I found myself waiting for similarly comedic incidents, but the film never headed consistently in that direction. An ambivalent ending was a bit unsatisfactory as well, leaving one strand unnecessarily loose. It’s probably a film where you might look back fondly on some of the elements, then remember, overall, the whole thing was not so great.