In 1959, Indochina – that’s Vietnam nowadays – had just expelled its French colonial masters. This left a power vacuum, and the lack of authority made it a save have for all manner of questionable characters. In this case, a group of ex-Nazis have embedded themselves up country, under the leadership of Steiner (Kulich). For amusement they run brutal fights, with their top brawler an ex-soldier and ex-IRA operative, Martin Tillman (Adkins). But when Tillman’s past threatens to cause trouble, he’s released. He doesn’t go far, working as a bouncer in a nearby bar, and in a relationship with the half cast Isabelle (Chan), who just happens to be Steiner’s estranged daughter. Everything seems almost idyllic. 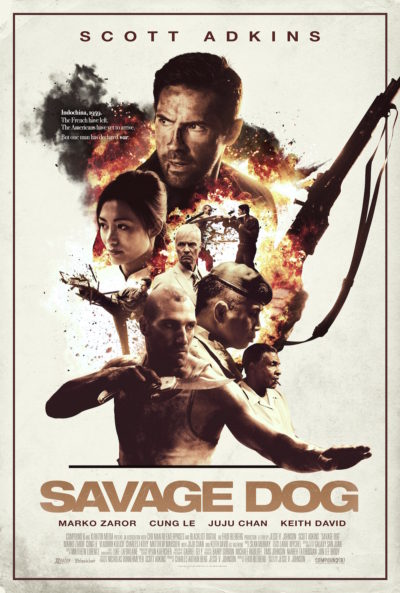 Of course, this is a Scott Adkins film, and all the signs are there, foreshadowing what’s to come. Supporting characters will die or part ways from the hero, leaving him no option but to embark on a path of Savage, bloody revenge. Well, I guess he could just move on with his life, but where would the fun be in that? This culminates in a battle against Steiner’s top enforcer, Rastignac (Zaror). He has this little Princess Bride-like speech he gives before fights. “My name is Jean-Pierre Rastignac. I have been known by many names. But the one that I most commonly associate with is The Executioner. I face you as an equal: with the exception of this blade, we’re quite fairly matched.”. So, not fairly matched, then?

There are few, if any, surprises here. Things unfold largely as you would expect, given ominous statements by Tillman, like “I bring bad luck to the people around me.” It’s all but inevitable Tillman will eventually be clawing his way out of the shallow grave in which Steiner has left him for dead. There are some holes in plot logic. Tillman is wanted in the UK for murder, yet opts to stay local after his release, despite the presence of the British operative seeking him. But the sonorous presence of narrating bar-owner Keith David helps paper over these cracks – at least to some degree – with further foreboding lines, such as, “Fear the hanged man, because he’s dead already…”

In any case, we’re here to see Adkins kick arse, and this is done in acceptable quantities, and to reasonably adequate effect. Though there is a jarring moment, where a henchman puts down his gun to battle Tillman hand-to-hand. The hero eventually picks it up to shoot him. Well, that’s not very heroic, now, is it? Things are elevated somewhat by the unusual setting, though the budget doesn’t extend to much beyond a few huts. The negatives include Chan, who is clearly not acting in her first language, and Kulich, who comes off as a low-rent Dolph Lundgren, and one of the less-convincing Nazis in cinema. It’s wise for the film to dispose of him well before its climax, instead letting Adkins and Zaror face off, in the expected meaty confrontation.