With a vibe borrowed in part from The Shining, this is a tale of the small snow-bound community of Beaverfield, forced to confront the arrival, or perhaps the return, of werewolves. And wouldn’t you know it, just as the grim reality dawns the road gets blocked, phones get cut and the power goes out. Mnnn. It’s one of those movies.

But, bear-with, as it’s actually quite quirky, likeable and lightly comedic, at least to start with. And on one level it’s not unlike From Dusk ‘Til Dawn whereby you will at some point think ‘I thought that this was supposed to be about werewolves…?’ as nothing-much continues happening for what feels to be quite some time.

Anyhoo, let’s start at the start and welcome Finn Wheeler (Richardson) who arrives ‘today’ as the new Ranger of Beaverfield. The endlessly apologetic Finn is staying in the local mansion for the assorted waifs and strays in town, of which there seem to be a few, along the way meeting Cecily the ‘mail-person’ (Vayntrub) with whom he establishes an immediate rapport.

“Welcome to Beaverfield, it’s a freak show…” she joyfully announces as, with a casually slow walk through the town, we are introduced to the soon-to-be-victims lovely quirky residents. I confess to a minor ‘WTF moment’ when we met Guillermo from What We Do in the Shadows, immediately wondering if I’d misunderstood, and that this was to be a vampire flick.

“Everyone here is, yeah, a little questionable…” Cecily blurts out before hurriedly scurrying away, leaving Finn to introduce himself to the most questionable resident of all, Emerson Flynn, the local survivalist.  The meeting goes well and Finn doesn’t die and, grand-tour complete, it’s time for our odd couple to settle back for some pre-nightmare bonding and denouement scene-setting. Seriously, it couldn’t have been clearer if they’d hung a sign out saying ‘This is where the final scene takes place’.

Asked why he ‘chose’ Beaverfield, Finn confesses:
“I had an incident at work…”
“Did you touch someone!? Show me where!!!”

And it’s finally time for the predicted storm to roll in, as with multiple utterances of “Heavens to Betsy” off goes the power, the phones, and blocked becomes the road. None of which should be an issue except that all of the backup generators have been disabled with some huge claw-marks ripped through them. Our apologetic Ranger investigates to report “…and also there’s a dead body on your porch.” 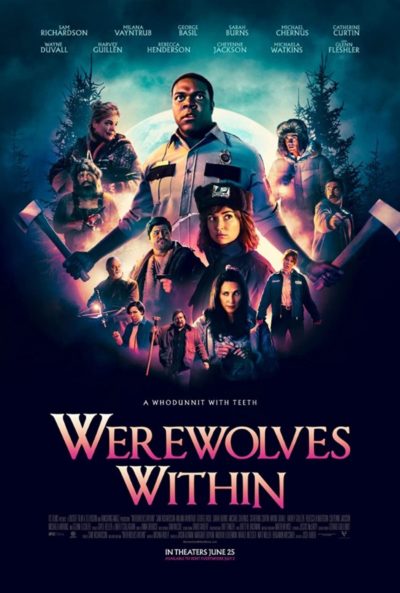 With the closed-room scenario finally in place, sadly without Ripley or Jonesy on hand to help out, it is time for the many sub-plots to start appearing like confetti at a wedding, and we are soon swimming neck deep in herrings. All red… maybe… Fear not however as the cutely silly dialogue continues to help the pace of the piece keep trotting along nicely.

Helpfully one of the waifs is Doctor Ellis who seems to know just a little bit too much, as well as being intriguingly well prepared. Upon examining the body she opines that the hair found around the wounds is “…canine, but not in the database…’. C’mon, don’t pull that face! Doesn’t every doctor have a canine hair database to hand along with huge, portable battery backup for their hi-tech microscope? Sheesh. You’re a tough audience!

Anyway, calm good sense takes hold, since ‘they mostly come at night… mostly‘ and so all decide to stay in the quickly-boarded-up mansion of death for safety. And everyone gets a really good night’s sleep, only trivially inconvenienced by one of the victims group having their hand bitten off. After a bit of panicking finally someone asks the obvious question as to how the werewolves got in and, erm, then out again.

It is with this bombshell at the half-way point that the cat is out of the bag, the squirrel out of the loft, the dog from the kennel, the horse gone from the stable and the werewolves most definitely out of the forest.

Kindly Doctor Ellis quietly provides the calming (and bloody obvious) explanation that ‘…it’s one of you…’ a point she reinforces shortly after, committing suicide by shooting herself twice. Yeah. Twice. Don’t worry too much about that as none of the soon to be dead idiots remaining folk seem to notice because they are far too busy deciding to put all of the available firearms out of ‘harms way’, succeeding mere moments before then deciding to run away in different directions, because… err… yeah… well… ‘reasons’.

After which it regrettably descends into shouty, runny, panicky, panicking, running, shouting and, erm, dying. Yeah, lots and lots and lots of dying. Some of it really quite ‘ouchy’ too.

Now, take a deep breath as I reveal that the point at which I gave up trying to make any sense out of anything else, was when the character with the very advanced night vision glowing green in their eyes decided to walk around with a very bright torch illuminating themselves every bit as much as anything else. Yuh.

And in the end thankfully the film ends.

So. Overall. Well, the giveaway should have been that Ubisoft were listed as producers and that the film is based on one of their computer games (that I’d never heard of). Regrettably this is one of those irritating films that starts really quite well and then descends into such stupidity that it leaves silly behind to become borderline incoherent. It does however minutely rally with the arrival of the ‘shock ending’ not quite ending as you might have thought its ending would end.

But it is still a dead-end. And I’ve been both kind and unkind.