Millie Bobbie Brown may be the first genuine star to be “made” by Netflix. Though she’s been acting since 2013, Brown reached the popular consciousness in a massive way, with her portrayal of Eleven in Stranger Things, likely among the top five Netflix Original shows yet made. [Probably 50/50 whether it or Squid Game became a bigger topic of water-cooler discussion] She then moved over to a supporting role in Godzilla: King of the Monsters where, personally speaking, she was convincingly out-acted by a giant moth. Then again, so was every other human.

It’s probably no surprise that Brown returned to Netflix for a pair of movies, inspired by the series of young adult detective novels written by Nancy Springer, which first appeared in 2007. The seven books at time of writing in The Enola Holmes Mysteries, give the renowned Sherlock Holmes a kid sister, the fourteen-year old Enola Holmes. A movie adaptation of the character was announced in January 2018, with Brown already attached, both as a star and a producer. Filming began in July the following year, and at the time, it was intended to be a theatrical release. A little thing called COVID-19 squashed that idea, and in April 2020, Millie Bobbie Brown came home, with Netflix buying the rights in April 2020.

They released it on September 23rd, and it immediately became the top movie on Netflix. It still sits comfortably inside the top 20 original films produced by the company, having racked up almost 190 million viewing hours, more than Army of the Dead or The Old Guard. It was thus absolutely no surprise when a sequel was quickly given the go-ahead, the news being made public on May 13th, 2021, with most of the major players returning. Filming wrapped early this year, and it came out last month, topping Netflix’s charts again, with 127 million viewing hours in the first two weeks it was available, and pulling the original movie back into the top ten.

But Netflix originals are like a box of chocolates, to borrow from noted critic Mr. F. Gump. You never know what you’re going to get. For every Extraction, there is a Spiderhead. Into which category do the two Enola Holmes films fall? Let’s find out.

Unexpected this!  I watched it on a whim not really expecting to be that bothered.  And it’s great!  And reinforces that getting out of your comfort zone is a good thing to do.  It’s also evidence that films based on books tend to be quite good.  It’s also further proof that Henry Cavill has the acting range of a cheesecake – fresh, stuffed, stale, or hewn from a damp plank.

“Look for what’s there, not what you want to be there.  You’ll see the truth soon enough.”

So, with the 4th wall fully broken in we plunge, for “the game’s afoot”, as is some nice cinematography.  It’s English-pretty meets the Railway Children and Hogwarts.

Enola (Brown) has two older brothers.  Mycroft (Thewlis) and Sherlock (‘plank’).  She also has Helena Bonham Carter (playing Eudoria) as her enigmatic mother.  A mother who has gone missing without much trace.

“What are you planning mother?”

Engaging.  Exciting.  Well shot.  Cute.  Forty minutes feels like five.  Amusing, funny, delightful!  With a riddle… …well realised/shot/SFX.  It’s Lundin innit, cawr blimey mista!  I suggest that you suspend everything and engage, immerse yourself as you would into a large warm bubbly bath, for this is simply joyous fun.  Irreverent and energetic.

“There’s no better disguise than fear.” 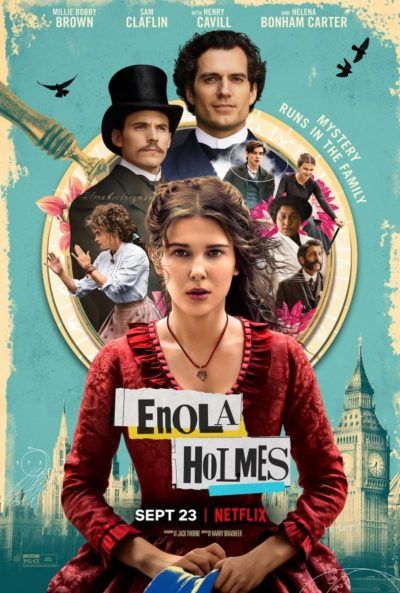 The story (I hear you muttering)?  Well, set in the time of steam-trains and telegrams, Enola’s mother has vanished, leaving Mycroft as ward of Enola.  Wanting ‘only the best’ he tucks her away in Ms Evil’s Boarding Prison Skule for Irritating Siblings.  Sherlock in the mean time drips like a tap.  Enola however is not to be stopped from finding her mother, and well… blah blah… lots of stuff happens that I have no intention of spoiling for you.  It’s all light and easy fare, along with some nicely worked modern threads woven in, as along the way Enola meets Viscount Tewkesbury (Partridge).

“Viscount Irritation, Marquis of Bothersome!?”
“…this is what my mother made me for…”

This is a delightful escape.  Clever, a good cast, good story, with charming-England, cliched and bottle up for ease of consumption.

“You have to make some noise if you want to be heard!”

The acting is well done and sprightly, fun, with quite a bit of talking to camera by Enola.  It also keeps a connection to childhood innocence, and when finally Eudoria (Carter) arrives on screen you can see the others players’ performances in the light of an acting grown-up.  She is immediately impactful and quietly impressive.

This is well done in all regards.  Stop reading this nonsense, and go watch it.  Immediately!  Now!!

“…I’ll pay you five pounds to swap clothes with me…” 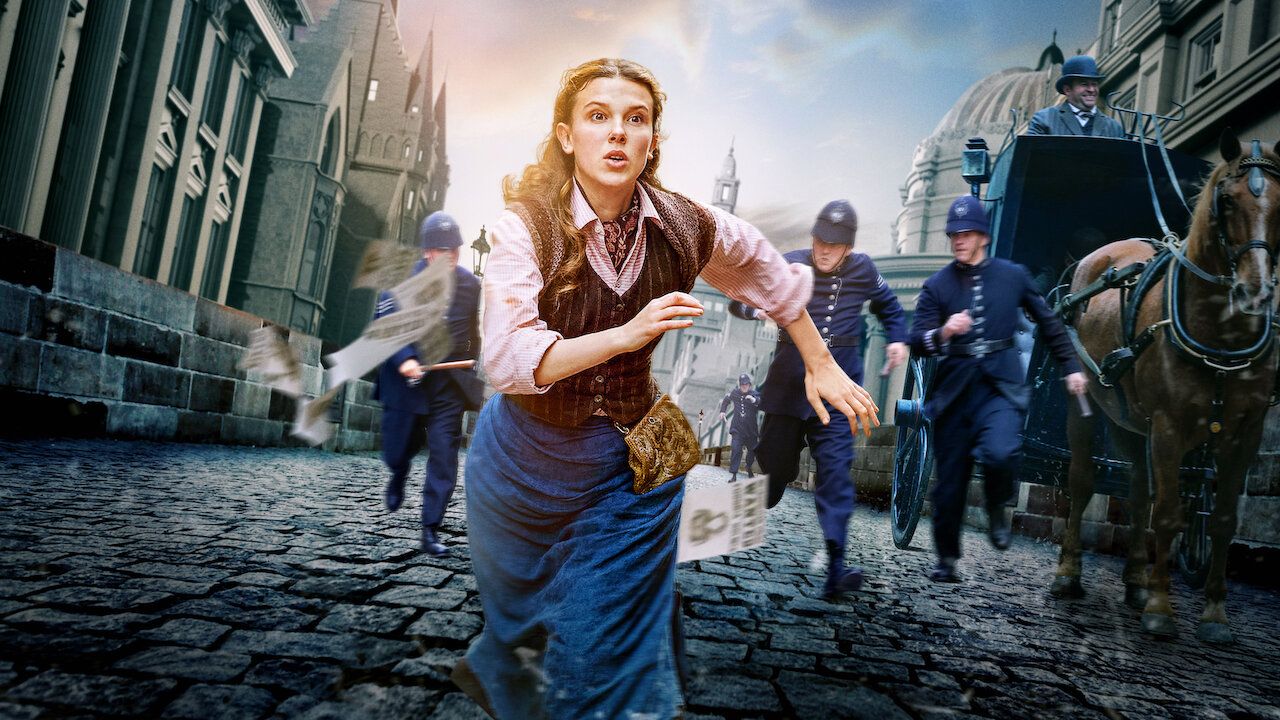 Having enjoyed the first outing so much I was vaguely dreading reviewing this, and I can say up-front that if you’re not a fan of having the fourth wall broken, then you are not going to enjoy this film.  So you can stop reading now.

This feels very much like a film-script that was filmed, and much less like a story being told.  It’s is also the perfect fare for a Sunday afternoon spent with good company and nice drinks.  Much like #1 it’s fun, amusing, engaging and clever enough without ever being too demanding.  The baddies are suitably ‘boo-worthy’ and the goodies similarly ‘hurrah’able’.

To be frank if you liked the first one, you’ll like this one, so you can stop reading now too.

This is cut from the same cloth as before, albeit there’s less of the feeling of the Railway Children about it, and sometimes has the feeling of ‘Miranda’ (a UK TV series), which didn’t sit comfortably for me.  It feels more like a check list of ‘to be included’ elements that has been filmed, and filmed very well indeed, with much of the scene setting exquisitely done and the cinematography well up to snuff, caw bilmey mista, ain’t’it just!  Apples-and-pears!

I suppose because it is less unexpected on every level it lacked the sparkle, immediacy and urgent pull of #1.  Nonetheless, it’s polished, slick, very well realised and acted, with even Henry Cavill doing something actually analogous to acting.  Yeah, I know!?  I needed a half hour lay down after and still feel queasy!  (I’m not a fan of the plank.)

The film is two hours long and feels it, without actually bogging down. 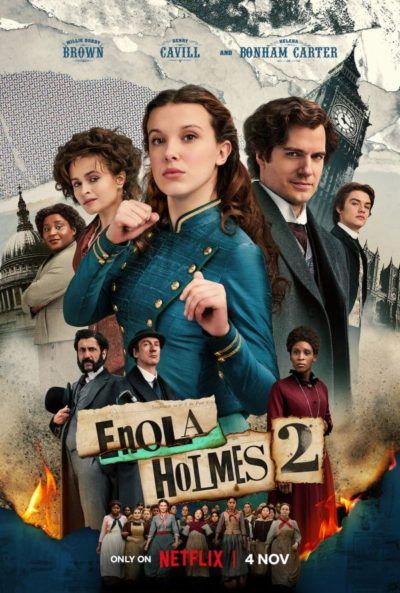 So the story?  Well, Enola has started a detective agency and business is very not booming, whilst Sherlock is busy garnering headlines galore, and mummy Holmes is popping in for bouncy, quirky and fun cameos… …and explosions…

Enola’s girls at the match factory are dying, Sherlock’s government money is going missing, and someone called Moriarty lurking around, having such fun as the game is afoot (again), and this is the play-ground for our players to play out their roles.

Anyway, and ‘who’d have thought it’, Sherlock’s current and Enola’s only case overlap, and finally Helena B-C arrives to enliven , energise, animate and give somehow a sense of centre, gravity, urgency and focus. (Yes, I’m a fan.)

I could say more about the plot but Jim normally does that far better than I, and to be honest it’s almost wallpaper in any event.  Whereas in the first film the story was the reason for everything, here it feels somehow almost tangential.

And finally, with forty minutes still to go, you feel the end of the film is nigh.  But.  No.

I watched this film twice.  Once to review it, and thought it flat and trite but still gave it a B-.  The second time through was simply to watch it with a niece* and enjoy spending time together.  And this time through I enjoyed it more, up to a B+.