Back in 2004, Zac Snyder’s Dawn of the Dead remake basically kick-started the zombie Renaissance. It would therefore be fitting if, seventeen years later, this marked the fag-end of the cycle. [I’m fairly sure it won’t: as I write this, I’m queuing up the Asylum knock-off Aquarium of the Dead] Truth be told though, Army is not consistently good enough to be a particular milestone. It’s 80 minutes of good content in a 148 minute film, with a decent high-concept, even if not the first zombie film set in a gambling mecca. Resident Evil: Extinction is the obvious predecessor, but in 2011, Remains took place in a Reno casino. It is, however, likely the first heist movie with zombies, and has been rattling around in production hell since 2007. 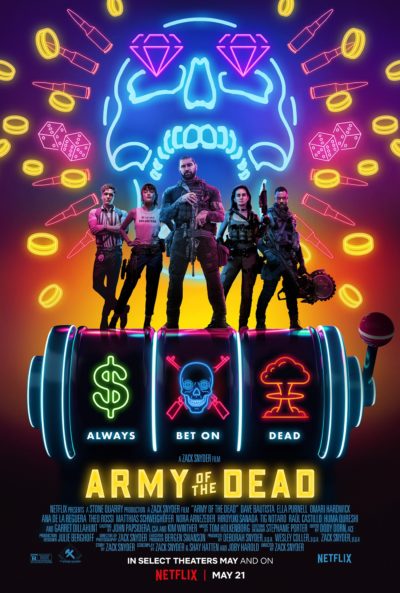 Former soldier Scott Ward (Bautista) is tasked to go into Las Vegas and liberate $200 million from a vault under a casino. The problem being, the city has been under quarantine and walled off for several years, following an outbreak after an accident involving a military convoy. It’s also about to be nuked by the government, to solve the problem permanently. So Ward has 96 hours to assemble his team, and get in and out, before anybody not wearing number two million sunblock is gonna have a real bad day. Oh, yeah: there’s also going to be a bunch of more or less related subplots, for example, about him reuniting and bonding with his estranged daughter. This is why it runs as long as it does.

Bits of this work rather well. I liked the concept of a structured, hierarchical zombie society. Might have been nice to see more of it, though we have recently experienced the issues of a film whose dialogue is entirely grunts and shrieks. So it’s probably best kept as a minor element. The problem is other aspects, that are set up, then completely discarded. For example, the notion of desiccated zombies, which return to life when it rains? Carefully explained on arrival in the quarantine zone. I spent the rest of the film waiting for a downpour which never happened – and this wasn’t the only such dead-end. However, we did instead get a number of characters, scenes and even lines of dialogue, more or less obviously cribbed from Aliens. To be fair, this could tie into a hinted at extraterrestrial origin for Zombie Zero. Still a bit naughty of Snyder.

There isn’t anything like the same sense of innovation we got in Dawn, where his fast zombies rewrote the rule-book. Everything changed for the genre thereafter, whether you liked them or not. This changes nothing, despite its combination of elements from disparate genres. It’s a generally competent zombie film, which overstays its welcome and is only successful on an intermittent basis.  Frankly, Aquarium will likely be more innovative – never mind a zombie tiger, it promises zombie starfish. Admittedly, the odds of it being a bit shit are also considerably higher.