Danny (Nielsen) has pretty much a selection of the usual teen problems. He can’t pluck up the courage to speak to the pretty girl in class, Rie (Semmelroth). He’s getting shaken down by the school bully, who also has it in for Danny’s little brother, William (Garvey). And their town has suddenly been invaded by giant, aggressive amphibians unleashed by climate change. Ok, maybe the last is a bit unusual. But it’s still something with which Danny and William have to deal, their Mom having gone to the mall, and Dad failing to be much use either. Not helping matters is the arrival in their home of a refugee (Gantzler) who, in the time-honoured tradition of apocalyptic movies, proves that the biggest threat may be other people. Well, maybe not biggest. Not when compared to carnivorous newts. But certainly a threat. 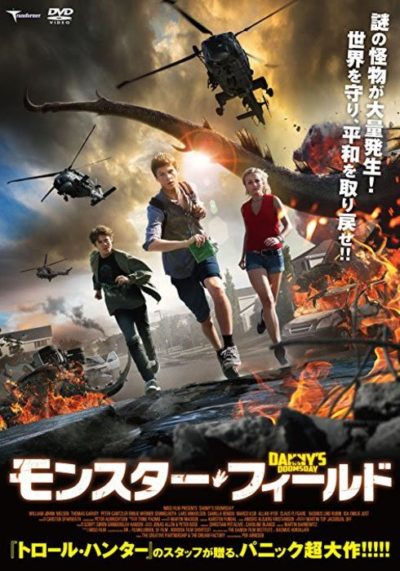 This is fairly standard fare, which ticks the boxes with a reasonable degree of technical competence. Naturally, Danny has to save his brother, work with the bully and win the heart of Rie, on the way to the mall in search of his mother. There’s not much new here, though you do wonder where everyone else in the mid-sized town has gone. For much of the time, the creatures are barely glimpsed, Barnewitz leaving the audience to imagine them from glimpses of their parts. They do look cool, and their use of sound to hunt by, is an interesting precursor to A Quiet Place. Danny makes better use of this tendency to distract them, than John Krasinski ever did.

It feels a very Danish apocalypse, much like What We Become. I’m not quite sure what I mean by that. It’s not as if everyone is going about carrying Lego and Hans Christian Anderson books. Maybe it’s that everyone is polite. Even the bully is well-spoken, which is in stark contrast to the ones we had at Forres Academy, who communicated largely with grunted threats. It’s also remarkably tidy, in that I’m not sure you ever see a corpse, or even an onscreen death. Much like the monsters, the violence is kept out of sight. A significant thread is the relationship between Danny and William. The former wants to protect his younger brother, but fears drawing attention to himself, and consequently feels guilty about it – again, in a way which feels kinda Scandinavian. It is probably more depth in terms of character, than you typically get in this kind of thing.

However, it all feels relatively low-key. The film only ramps up after a contrived air-drop of a convenient note from the authorities, politely informing them of an imminent gassing, along with not enough (three, to be precise) gas-masks. Will Danny finally prove his heroism, to both William and Nie? No surprises there either. This lack of innovation beyond the creatures is probably the biggest weakness. A bit like sixties creature featur Reptilicus (which pops up on TV at one point), being Danish is this movie’s main distinguishing feature, and that probably isn’t enough to succeed.