Worst episode of Rita ever… Ok, I should explain. We only heard about this while looking up to see what else Dinesen, the much-beloved in TC Towers star of that Netflix Den-rom-com show, had done. This zombie flick seemed rather more promising than Nynne, which appears to be a lame, one-woman Sex and the City knock-off, so here we are. And very different from Rita this certainly is. Perhaps the best way to describe it is, imagine Shaun of the Dead with all the humour removed. 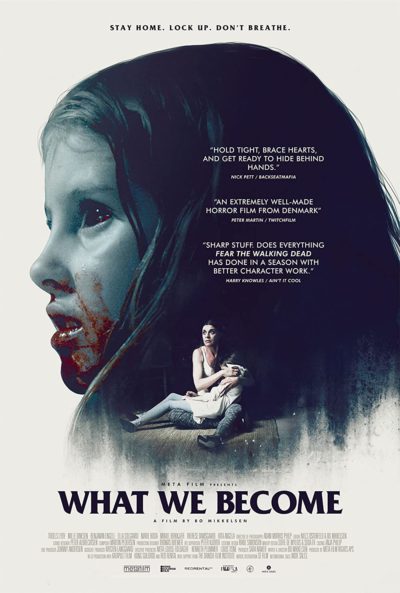 By this, in particular I mean that for most of the first half, the zombies aren’t a threat. They’re present: just in the background as a mounting sense of social unease builds, with the main characters being largely oblivious to their presence. Rather than room-mates, it’s a family of four who are the focus: Dad (Lyby), Mom (Dinesen), teenage son Gustav (Engell) and young daughter Maj (Solgaard). Initially, it seems like this is just an outbreak of a particularly virulent flu strain, with mandatory quarantine being strictly enforced by the military. Given this was made five years ago, its foreshadowing of things like the Chines government welding doors shut in response to the COVID-19 outbreak, is rather startling.

Eventually, Gustav make a nocturnal sortie, and visits the nearby location to which the infected are being taken. He discovers the treatment they’re being given is… a bit bullety, shall we say, and also manages to unleash a horde, triggering the next, more violent phase. This forces him and his family, along with a couple of neighbours. out of their sanctuary and into the outside world, in an attempt to reach safety. As in Shaun, things become increasingly dark at this point, and it shares the “how do you deal with an infected family member” thread; one scene in particular, feels so similar, this could almost be a Danish remake.

Unlike Shaun though, there’s almost no let-up in the downbeat tone. Though, to be fair, the film opens with a scene which strongly suggests things are not going to end well for anyone. Probably best to believe it. There isn’t much particularly new here, though it does appear to be the first “professional” Danish zombie film. As such, I suspect the military action depicted is likely more disturbing in that liberal nation, than it would seem elsewhere. Despite the lack of real surprises or twists, it is competently assembled, and the characters do manage to become ones about whose fate I cared.

To be honest, I’d probably have been more entertained, if this had been a Very Special episode of Rita, with the entire cast being characters from the show, trying to cope with the zombie apocalypse. The idea of a chain-smoking teacher trying to fend off the undead with unfettered sarcasm is strangely appealing. Though I’m not sure how well Hjordis would cope; there’d probably be a zombie-teacher conference involved.