While generating a fair degree of tension, and benefiting from a winning performance by Hepburn (probably the closest she came to be being an action heroine!), this founders on the ridiculous implausibility of its plot. Based on a Broadway play, the story centres on a doll stuffed with heroin, which its courier hands off to Sam Hendrix (Zimbalist Jr.) when she arrives at her destination, after realizing she’s being watched. The intended recipient, Harry Roat (Arkin), then recruits two con-mane, Mike Talman (Crenna) and Carlino (Jack Weston) to dupe Sam’s blind wife, Susy (Hepburn) into handing over the doll. The chosen route is a complex scheme, involving multiple characters, such as policemen, intended to convince Susy that Sam is a murder suspect, and that the doll is a key piece of evidence in the investigation. 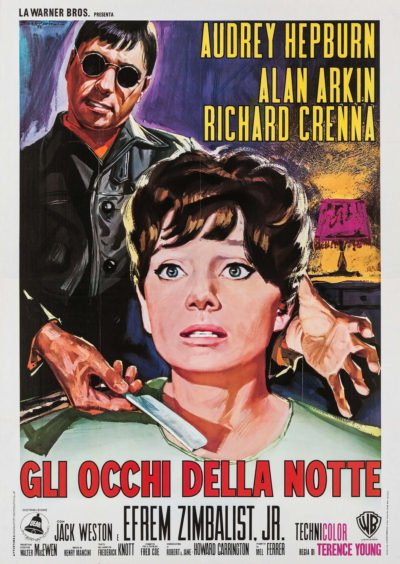 Really, if you can’t think of better ways to achieve the desired end, you need to turn in your criminal mastermind membership card. For example, it seems obvious that Sam would have a better idea of the doll’s location, having been the one who received it. Yet they ignore him entirely, waiting for him to leave the apartment – even if, without wishing to be ableist, Susy barely knows where chairs are, still coming to turn with her relatively-recent ocular disadvantage. Roat’s willingness to engage in brutality is established early on, by a corpse in the closet. Applying something similar to Susy would seem far more likely to succeed than the complex scheme which unfolds here, involving a surveillance van, a phone booth and Roat playing both halves of a father and son.

Still, this works quite nicely if you can put qualms aside about what Roger Ebert called, when discussing this film, “an idiot plot”. He applied the term, mostly for Susy’s apparent inability to… oh, I dunno, lock the freaking door, which gets more traffic through it than a truck-stop whore. The performances definitely make it considerably easier to take that leap of faith. Arkin in memorably creepy, right from the outset, manipulating his henchmen with a mix of coercion and persuasion which suggests plenty of experience. There’s a perpetual underlying threat of violence from him, which the likes of Mike are unable to match, to their personal cost.

Conversely, Susy is someone for whom it’s very easy to root, with Hepburn buttressing her usual charm and appeal with a steely spine which only become apparent in the movie’s final act. She takes out all the lights in the apartment, to level the playing-field between her and Roat. Indeed, given her experience, it becomes plausible for her to gain the upper hand, drenching the villain in gasoline to stop him from using matches to light his way. It all leads to a decent climax, unfolding in near-darkness – though these days, mobile phones would make such things a bit more difficult. Mind you, there’d probably also be protests from the blind community about casting an actress with two working eyes in the role.