What the fuck did I just watch? It had been sitting in my YouTube ‘Watch Later’ pile forever, until Chris had to go out early one morning, and I needed something to kill the time before work. But by the end, I was giving it a standing ovation; well, I would have, had I not been lying in bed. After a series of bad films which have been no more than somewhat entertaining, this was the kind of thing that restores my faith in the genre. What seemed initially, just a cheap, badly dubbed horror flick, turned into… Well, actually, it remained a cheap, badly dubbed horror flick, but also escalated into spectacular excess with exquisitely questionable scenes. We are talking fish rape, people. Fish. Rape.

Of course, it doesn’t start with that. It begins with five highly annoying young people, two guys and three gals, taking their boat out on the water. Particularly irritating is irrepressible horn-dog, Bobby (Bon), who acts like a giant penis on legs: the alternate title accurately describes his intellectual capabilities. There’s also Mike (Rogers), who is the quiet, intellectual type, clearly gifted with enormous patience for not punching Bobby’s lights out inside 30 seconds. The three girls are pretty, but largely interchangeable, lacking much character, even to the level of Bobby. There are two sisters, Dorothy (di Palma) and the virginal Julie (Anne Wolf), plus Mike’s girlfriend Margaret (Marino), but for much of the movie, they might as well be Bimbo #1-3. 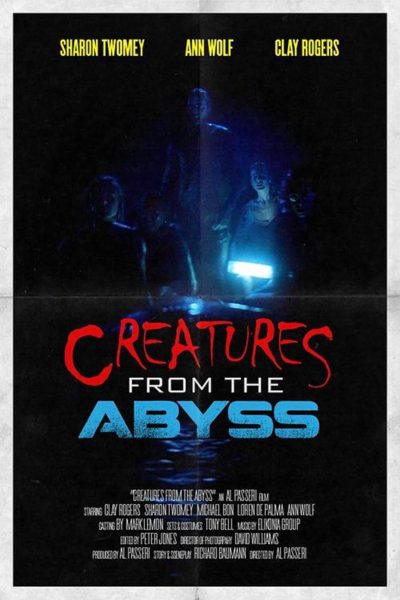 The boat runs out of fuel, so they start rowing, and things go from bad to worse, as a storm breaks out and they drift across a floating corpse. However, salvation is at hand, in the shape of another vessel, apparently a scientific research ship. When they board, they find it is apparently abandoned, though the interior decor is part oceanographic vessel, part low-rent whorehouse. Seriously, if Jacques Cousteau and Tony Montana designed a boat together, it would probably end up looking like this.As well as the expected research stations, there’s a one-eyed, talking mermaid clock on the wall, and the shower is run by an AI which attempts to seduce bathroom users. Essential on any marine expedition, I’m sure you agree. Here’s another example of the decor, an erect penis lamp.

The new arrivals find a lab filled with creepy looking fish in jars, and a hold containing large bags of white powder, causing Bobby to conclude this was a floating drug lab. Mike is unconvinced and continues to dig into things. I’ll get to the point much quicker than the story does: he discovers this was the site of a radioactive waste dump, which contaminated the local plankton, thereby causing the fish which feed on it – living fossils from prehistoric times – to mutate. Though since the unmutated versions were described (and I wrote this down) as “carnivorous and gay,” you know nothing good can come out of any subsequent changes. They also find a survivor, a professor played by producer/director Deran Serafian, best known for the Charlie Sheen/Nastassja Kinski flick, Terminal Velocity. But since the character serves no purpose, such as providing useful information, he can safely be ignored.

There is a plethora of fish-POV shots zipping around the ship, which pose more questions than they answer – not least, shouldn’t they be acting like… well, fish out of water? Stuff does, however, start to ramp up, especially after a tasty meal of fish. Dorothy projectile vomits up creepy crawlies (the puddle of puke just lies there on the bathroom floor for the rest of the movie), and things largely go off the wall from there. Margaret is attacked by a flying fish – and not really a flying fish, more a fish that flies, if you see what I mean. You remember I discussed HoverBatTM? Well, this film brings you the joy that is HoverFishTM. This was where I decided the film must be shared with Chris [though she may not have appreciated it as much, going by her review: “Let’s never watch that again.”]

This attack causes Mike to go a bit ballistic, smashing up the laboratory in a loving slow-motion sequence, with what appears to be a giant frozen Filet-O-Fish. There’s also this glorious exchange between Mike and the survivor:
– “Professor, how long have you been fucking fish?”
– “They were old enough!”
– “I understand. These things happen…”
This is the slippery slope they warned us about, folks. It begins with gay marriage, and before you know it, academics are having sex with jailbait aquatic creatures. 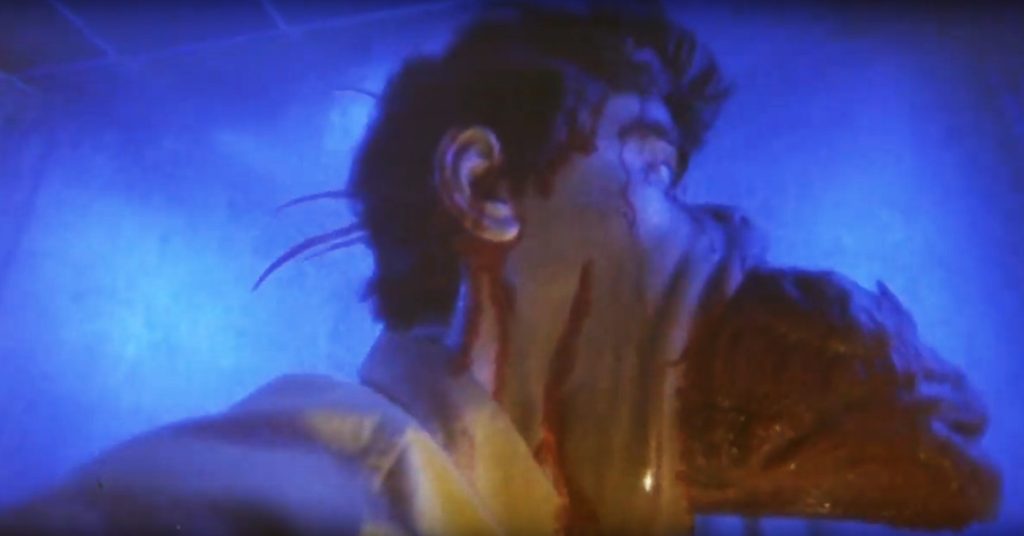 Then we get to the piece de resistance. In amid all this piscine carnage, Julie decides it’s the perfect time to offer her cherry to Bobby, a poor decision on a whole number of levels. But in particular, because Bobby, who mistook the contaminated plankton for drugs, mutates mid-coitus into a giant fish creature, and keeps right on fucking her. Now, while I guess she technically consented originally, I think this was not in the expectation that her lover’s face would split open (above), turning into a monster, and popping one of his eyeballs into her mouth. Her shrieks tend to suggest that when she realized – though this takes surprisingly long, complete with some languid tentacling – her consent was probably withdrawn, hence: fish rape.

Really, the film can only go downhill from here, but it maintains a surprising amount of twisted energy, with Bobby completing his transformation into a lovingly stop-motion animated creature, and Julie laying her own caviar buffet. Understandably, Mike decides to take off and nuke the site from orbit, puncturing fuel barrels and setting a low-tech fuse in the form of a burning candle. I was particularly amused by the ship’s apparently sentient PA system, whose warnings get increasingly manic as the explosion nears. Indeed, it may be the best performance in the entire movie. Well, next to the one-eyed mermaid clock, anyway. It ends in a way ripped off from The Evil Dead, which is at least a nice change from all the other movies shamelessly pillaged here.

This is not a good movie, by any stretch of the imagination. But it did a far better job of keeping my attention that most mainstream cinema, simply to see what lurid depths would be plumbed next. It’s the kind of movie that cries out for a remake, with a budget that can fulfill the warped imagination of the makers at an appropriate level. Add better performances (the ones here may have been in English originally, but are still post-synched into oblivion) and you’d have a towering classic, likely banned in 31 countries on the ground of sheer tastelessness.