I must confess, I kinda wish I’d been paying more attention to this. As it unfolded, I was increasingly convinced that it was some kind of bizarre Russian mash-up, as if Quentin Tarantino had directed a remake of Tucker and Dale vs. Evil. The further it went on, the less interesting it became, though never quite sinking to the depths the previous sentence might imply. Then, right at the end, the script yanks the carpet out from all that you’ve watched over the preceding eighty minutes. It goes from, “Well, that’s an hour and a half I’ll never get back,” to “Maybe I need to watch it again.”  Only maybe, however. I can’t say I was entirely convinced, though the opportunity to gawp at some truly ugly Russian haircuts is never entirely unwanted. 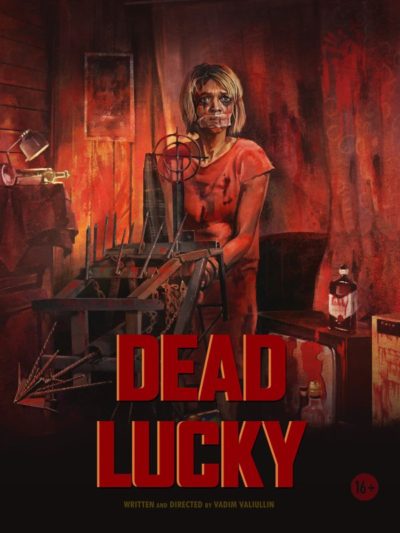 Like Tarantino, none of the characters here use their real names, but are referred to (and credited as) numbers #1-6. They form a group of assassins, working at the command of an unseen Mr. Big. #6 (Bogdan) is an unwilling member of the mission, previously being content to steal cars for the group. But this time, his brother (Povedsky) has dragged him along, with the target a rock star who is out at a cabin in the woods. Naturally, it’s not that simple. Turns out there’s a party of guests, who also need to be disposed of. The musician has a girlfriend (Adamova), who dodges the carnage. And last but certainly not least, there’s a large, bald serial killer stalking the woods.

You do get some clues to the twist in a steady stream of flashbacks to #6’s abused childhood. But it is still probably the cinematic definition of “go big or go home,” and whether you buy it or not is largely going to determine how you feel about what has gone before. Personally, I didn’t feel the end quite justified the means, and I sense there may be a number of cultural beats that just weren’t able to make it past the Russian border. On the plus side, I can’t complain too much about a film which is willing to drag a harpoon gun into the middle of a forest. After it’s used the first time, it still keeps popping up and I repeatedly found myself wondering if another firing was on the cards.

To be honest though, the harpoon gun is more memorable than most of the characters, for whom numbers are about all they deserve. They are a collection of psychopaths, typically with little more than a single defining feature, e.g. “former KGB” or “misanthropic woman”. To be fair, you could argue the twist provides a justification for this as well, though even then, it feels more like an excuse for lazy writing than an actual explanation. But I wish the harpoon all the best in its future franchise aspirations, and look forward to seeing where its career heads from here.