If you want an example of how not to include social commentary in your horror movie, this would be it. Maybe it comes off with considerably more subtlety and/or relevance in its native Brazil. But this makes its point with absolutely no style or grace, then sits back and smugly rests on what it believes are its laurels for the next hour. The sole, significant idea this has to offer, is the rich are literally eating the working-class. That’s it. If you’re wondering how this concept can be stretched out to sustain a feature length movie… I’m here to tell you, it can’t. Ten minutes of content in an 80-minute film, folks. 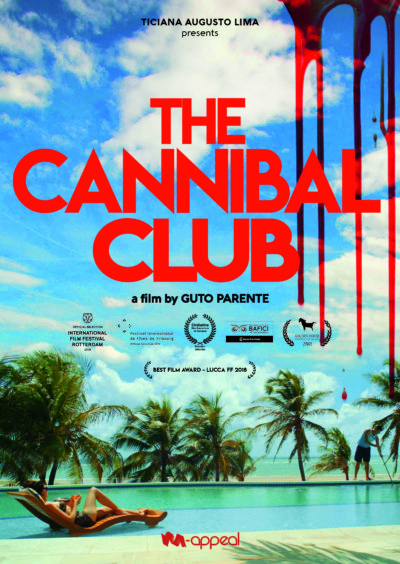 The focus is on wealthy husband and wife, Otavio (Teixeira) and Gilda (Rios), whose relationship is carnivorously open. By which, I mean, she has sex with the pool-boy, who then gets an axe in the back of the head, and becomes tacos. They then find a replacement for the position, somebody without family to miss them, and the cycle repeats. They are also part of the titular society, under the leadership of Congressman Borges (Domingues), which has gatherings where the live sex show performers turn into rodízio. At one of these, Gilda sees something she’s not meant to, and we already know Borges’s zero-tolerance policy towards any hint of compromise. Suddenly, new handyman Jonas (Maria) may be Otavio and Gilda’s best hope of surviving the wrath of Borges, rather than becoming a selection of freezer packs.

It’s not exactly a new concept, but the way it is handled here, makes the final fifteen minutes of Society look like a masterpiece of understatement. None of the characters ever become even slightly more than caricatures, even the one with whom it feels you’re expected to empathize, in Jonas. He is little beyond a plot device on legs. Instead, we get endless sequences, intended to drive home what utter bastards rich people are. This reaches its ultimate overkill in the speech Borges gives to the assembled club members, a frothing rant about  “delinquents. pederasts and filthy scum that should be smashed under our feet”. It sounds like a parody of how /r/politics thinks everyone on the right actually speaks.

For a film “about” cannibalism (at least, in a loose sense), it’s surprisingly restrained, at least on the violence side. On the other hand, Parente does not skimp on the sex and nudity – it took some time to locate the relatively tasteful still, top. To be honest though, I would have been willing to trade some of that, for an approach to the material which was more than a superficial skim across the surface of the class struggle this provides. While well enough polished technically, it’s the kind of idea created in the students’ union of a lefty polytechnic at 1 in the morning, after too many Fair Trade cocktails. As subtle as an axe to the back of the head, that is likely where the idea should have stayed.