Full disclosure. We watched this Australian movie, in the wake of having seen all five seasons of the American TV series by the same name, which was based on the film. This likely diluted our appreciation for the movie, simply due to recent familiarity with the basic concept. That applies, even though the TV show goes in a radically different direction. Not necessarily better, or worse; just different, and likely inevitably so, given the far greater length with which it has to work. The movie is far darker in tone, and can’t afford to waste any time. Death is a frequent visitor here, and typically comes unexpectedly. 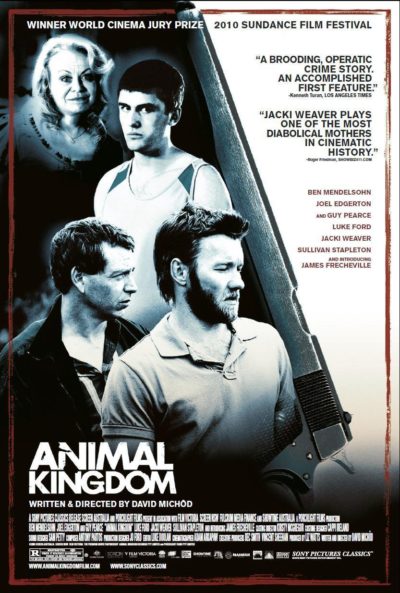 The idea is, as noted, the same. Joshua Cody (Frecheville), known as J, has to move in with his grandmother, ‘Smurf’ (Weaver), after his mom dies of a drug overdose. Smurf is the matriarch of a tightly-knit crime family, and J’s arrival proves a challenge, both for him and his relatives. That’s the common ground between the film and television versions. In the TV show, J ends up adopting their lifestyle, and there’s a lot more focus on the exploits – typically high-end robberies – of the Cody family. Here, J is uncomfortable from the get-go, and never fits in. Detective Nathan Leckie (Pearce), who is investigating the family, sees this as an opportunity, and takes the chance to apply pressure to J. Though the cop has sympathy for the teenager, and the situation into which J has been dumped.

Perhaps the biggest difference is in the Codys here, who are tired and seeking a way out. We never actually see them commit any crimes, in part because the police are permanently camped outside the family home. Worse than the legal net closing in under Leckie, is the branch of the force specializing in armed robbery. They behave as a death squad, looking to spare the authorities all the trouble and expense of a trial. Their actions trigger an understandable reaction from the Codys, and things escalate from there. This is largely through the paranoid psychopathy of Andrew ‘Pope’ Cody (Mendelsohn). While he’s hardly a model of stability in the series, the version portrayed here is thoroughly cold-blooded, and has few if any redeeming features.

If comparisons are inevitable, these are really two separate entities. The film is an intense, oppressive depiction of a family falling apart, through pressures both internal and external. In contrast, the TV show takes the idea of a crime family led by its mother, then runs with it in other directions, bringing in influences from the likes of Point Break and Sons of Anarchy. It’s definitely a work of entertainment, and much more sympathetic to its criminal protagonists than the film, which pulls no punches in depicting their immorality. Or, to be fair, that of certain police officers; it’s quite a bleak view of humanity, overall. While Weaver got an Oscar nomination, I’d say Mendelsohn’s performance is more praiseworthy. I still can’t honestly recommend it to fans of the show; it’s just too different. Yet if you can take this on its own merits, there should be enough to appreciate.