Rating: B+ (C- if you’re not Statham-tolerant.)

If you aren’t bothered to read the remaining [who knows how many] words, I’ll cut to the chase and just say that this film is well worth a watching with or without beers – and so you can now safely click away.

Right, so that’s got rid of the riff-raff. Just for you lovely, super cuddly, remainers I can reveal that the film is ostensibly a straightforward revenge story, albeit working on several levels, and to be frank, it’s not a bad one at that. It is also unapologetically three things: a Jason Statham film; a London film; a night-time film. Except that it’s not, and yet it is. Sort of. Kind of. Hmmm. Let me explain, as best I can.

In summary: escaped loony ex-commando Statham lives on the streets of London, to both avoid and embrace hummingbirds, and along the way he has adopted Isabel, a young woman who he non-euphemistically looks after. Running away from some generic bad-nasty-violent street hoodlums he falls into the hugely, almost hilariously, implausible basis for the whole rest of the plot. Indeed, I’d recommend that you never spend a second wondering about the ‘set-up’ given that he conveniently lands in an apartment, where the clothes of the absent incumbent fit him like a glove. (Which will seem ‘somewhat odd’ when we finally greet said incumbent.) 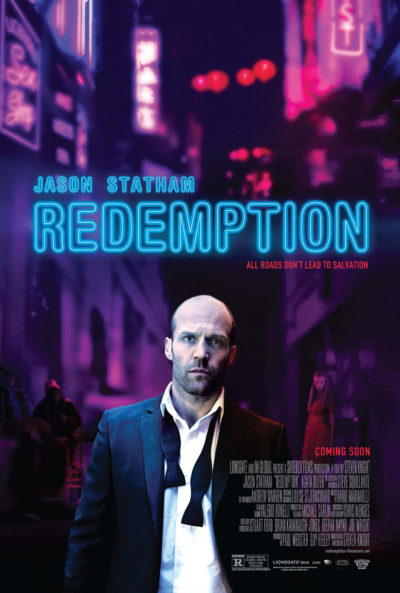 Anyhoo, it is through the good ministries of the ‘Sisters of Redemption’, that he tries to find Isabel, from whom he has become separated in the midst of the hoodlums’ interruption. To be honest, I’d really have liked them to be called the Sisters of Mercy… la la la this corrosion… but …sorry… where was I…?

Oh yeah… well… anyway… this is on some levels an odd film. Its pace and tone is lazy, mercurial, blunt, direct, urgent, delicate, brutal, kind, touching, gentle, violent, horrible, tender, unsettling. It intersperses Statham’s back story via flashbacks pretty much all the way through the film, and it’s not just his back story that we learn along the way. Overall it’s very nicely shot, with the sets often providing the ancillary background necessary to some of the tangential and brazenly homoerotic frippery involved.

This is a London film, where Soho and the surrounding environs are utterly key in tone, mood and palette. They provide the vibrant canvas upon which the story is played out, watching Statham progress from bottle-washer to driver to minder, and into the callous and vile underbelly of this writhing city – where any business is good business, brutal and grubby and violent and very profitable for some.

Using months as chapters, it is at the halfway point where Isabel turns up to crystallise the collision between his new life and the people that he once knew and still cares for.

Overall and despite everything the film is oddly touching and gentle, almost tender and once or twice it almost begs the question if Jason can actually act. I’ll be frank (sorry to transport you) but the jury’s still out on that. However, Agata Buzek is utterly magnificent and completely believable in her much more than a supporting role. Delicate, steely, deftly realised and scarily fragile, hers is a brilliantly fabulous performance. As is that of the Mother Superior who conveys much, through a world-weary tiredness and by bluntly saying very little.

Ultimately (however) this isn’t really a film about revenge nor even redemption. It’s about resolution. The closing of chapters, the ending of all that has gone before. There is quite a bit more to this film than I’ve alluded to above, some of which is quite lovely and tender. Whilst it’s not a great film, it is a good film, and it is well worth 100 minutes of your bottom-on-seat time. Just don’t expect to remember it two days hence.