If nothing else, this film certainly set the record for the most severed dicks seen in a piece of entertainment. Okay, the previous record was probably… um, I’m going out on a limb here and guessing “one”. In which case, this blows past that inside the first 15 minutes, and doesn’t stop racking up the points thereafter. When I call this movie a bit of a sausage-fest… Yeah. Speaking of which, we reach peak separated penis, when the vampire Hjörtur (Steinason) is enjoying a hot-dog with his sidekick, Hulda (Kristinsdóttir). Well, she is enjoying a hot-dog. He dumps out the weiner, and replaces it with the organ of one of his victims, on which he munches happily. 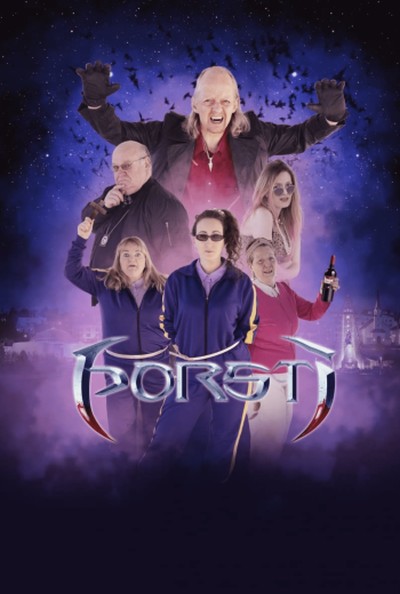 Yeah: at the risk of stating the bleedin’ obvious this is not quite your regular vampire movie. Hjörtur meets drug-addict Hulda when she saves him from being beaten up by two street punks. Unused to such compassion, he wants to do something kind for her in return. Her brother recently died of an overdose, so what would be nicer than bringing him back? Okay, he’s been dead for a week, so might not be exactly as she remembered him. But it’s the thought that counts,  right? Unfortunately, all the resulting carnage brings Hulda to the attention of police detective Jens (Jensson). His wife Ester (Sveinbjarnardóttir) is a TV evangelist, to whom Hjörtur is the Prince of Darkness, and provides positive proof that the end times have arrived in Reykjavik.

It’s an oddly sympathetic tale, in which none of the above can really be considered to be villains. Typically in a vampire movie, the audience’s sympathy is either with the bloodsucker, or those who are hunting them, but the film does a rather good job of making everyone seem likeable. Even Ester, initially portrayed as a fruitcake, turns things around. This is largely because she’s not wrong, about evil having come to the city: it’s just not quite who she thinks. Though the general lack of concern by the authorities – it’s basically just Jens investigating – at the number of Hjörtur’s victims is a bit odd, considering the average murder toll in the whole of Iceland is under two per year. Or “a quiet Saturday” in Chicago.

I do also have some issues with the ending, with a mid-credits scene which feels forced and unnecessary, and the film seems slightly to have two speeds: maudlin conversation, and enthusiastic arterial spray. We never do quite find the truth about what happened to Hulda’s brother, which feels important. However, all the elements possess some appeal, and as usual with Icelandic movies, it’s off-kilter enough to make for a continually interesting viewing experience. I particularly liked how this felt partly like a crossover between the vampire and zombie genres, with the people Hjörtur infects definitely leaning towards the latter. But it’s safe to say, I won’t be eating sausages for a while.