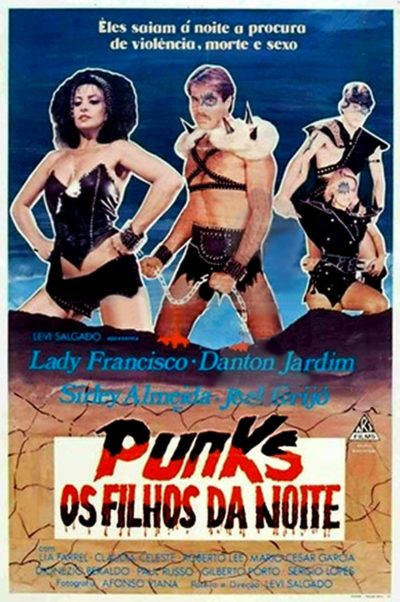 It takes place, I guess, in the near-future, when urban decay has left the city as a battleground between various gangs, such as the Dragos, Ladies, Rats and Babies. Though based on this, there’s hardly anyone else alive outside the gangs, and certainly nobody over the age of 35 or so. Interestingly, the two top groups, battling for overall control, are both led by women. Though considering they appear to spend their time sitting around watching a shitty nightclub floor-show, I’m unconvinced of the threat level posed. I will say, the drag queen in the floor show is quite convincing in this universe – albeit, less because she looks like a women, more because most of the genuine females here look like transvestites. [35 years later, most drag queens still appear stuck in the early eighties. Move on, people. Move on…]

With all the bare chests, disco music and eye make-up, I suspect that even in the hardcore version, this would be the gayest heterosexual porn movie ever made. The pic, top, illustrates this quite well, I feel. Anyway, the plot, such as it is, largely concerns Big Cat (Jardim), a loner who operates outside the gangs. As can be seen in the poster (right), he wears spiked shoulder-pads, which must have come from a Mad Max surplus store. Either that, or they provide protection against drop bears, if those are an issue in Brazil as well as Australia. Since Mr. Cat is perceived as a threat, his girlfriend, Lorna, is raped and killed, while he is brought back to the gang’s lady boss, Queen (Francisco). She then rapes him, before Big Cat escapes, vowing revenge for both himself and Lorna.

While there are one or two cheap laughs here – most obviously, the sequence where it briefly looks to be turning into West Side Story – it feels like a very long sixty-three minutes. The several lip-synched nightclub routines and the sex scenes are absolutely terrible, and the paucity of the production is also often painfully obvious. There’s no particular story-line to be found either; about the only significant development is the end, where Queen voluntarily abandons her position, teams up with Big Cat (who has apparently forgotten about Lorna very quickly), and they ride off together on his motor-bike. To honest, I felt relief when the credits rolled. Punk’s not dead – but in this incarnation, it just smells that way.