You could argue over whether this should be included under Ireland or Scotland, since it appears to have largely been filmed in Glasgow. Or maybe even Wales, that being where Barnard hails from. But Wikipedia firmly states it is Irish, so I’m going with that for the purposes of this. It’s a decent example of “hoodie horror,” as manifested in Eden Lake, where the threat comes from disaffected youth. Previously, I guess, it would have been mods or punks, but this is the 21st-century equivalent, I guess. 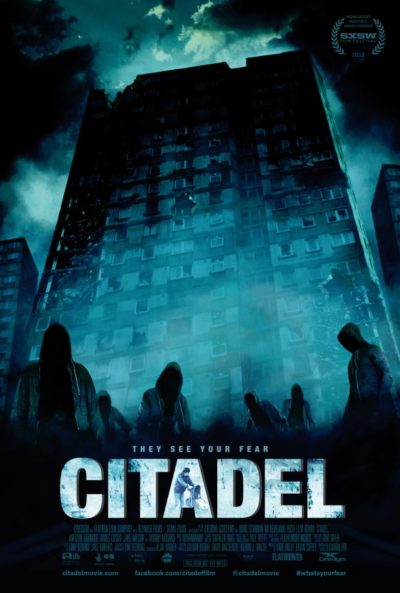 Due to a lift malfunction, Tommy (Barnard) can only watch as his pregnant wife (Shiels) is attacked, just outside the door of their tower block flat, by a group of hooded thugs. Her child survives; she does not, and Tommy is left, understandably, with a severe case of agoraphobia, as he tries to bring up their baby by himself. Compassionate social worker Marie (Mosaku) tries to do what she can to help, but Tommy is not the easiest person in the world to deal with. Matters aren’t helped by the apparent return of the hoodies, whom he sees lurking outside, and apparently even coming into his house. A rather eccentric priest (Cosmo) warns Tommy that they are coming for his child, and are literally not human. While Tommy is initially sceptical, the first part of the priest’s warning proves true. The pair have to team up and return to the tower block where it all began, to face the threat and defeat it.

This is most effective in the early stages, depicting Tommy’s descent into near-insanity, amid the hellish cityscapes of the worst urban estates. Chris asked me repeatedly, “Are there really places like that?”, and while this is perhaps an exaggerated version of inner-city life, it’s only slightly that way. It’s very easy to see how the environment could create a truly feral world, where only the fittest survive. Barnard gives a sympathetic performance, despite all of Tommy’s issues. Also punching above its weight is Cosmo’s depiction of the priest. He comes over as a foul-mouthed urban version of Father Sandor from Dracula, Prince of Darkness: a man fully committed to fighting the forces of evil, regardless of what you think, or even if you believe him.

Less effective is the final confrontation, which offers only a murky and confusing climax in lieu of the definitive resolution this kind of modern fairy-tale needs. There were also times where Barnard seems to be trying too hard to be a low-rent version of Elijah Wood, his performance reduced to a single look of concern. This was apparently based on an incident where the writer/director was attacked by a gang, and the old saw, “write what you know”, apparently proves true. It would certainly make sense if Foy knew more about creeping urban paranoia,  than storming tower blocks inhabited by sportswear goblins.