It’s probably a good rule that, should Cushing and Lee ever get into your train carriage, it;d be best to get off and take the bus instead. If Horror Express didn’t convince you of the wisdom behind that philosophy, this Amicus anthology will do the trick. Lee, Sutherland and Castle are among the five passengers sharing a journey with Dr. Schreck (Cushing), who turns out to have a deck of tarot cards which he used to tell the others’ immediate futures. Let’s just say the Death card gets a bit of a workout, in tales which are entitled, in order, Werewolf, Creeping Vine, Voodoo, Disembodied Hand and Vampire, before a final twist which I actually figured out before the film even started. 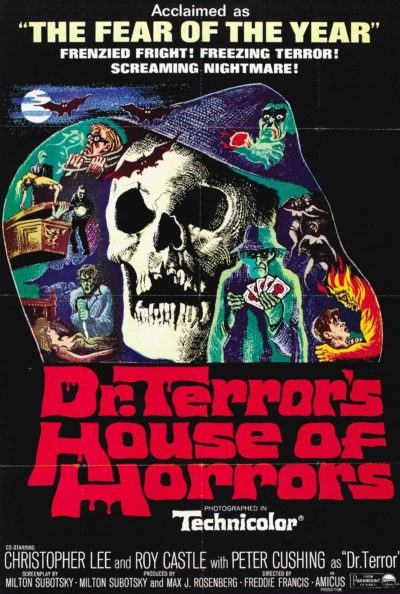 For this was watched at the request of Chris, as she remembered it being “quite scary” when she had seen it previously. Post-viewing interrogation revealed she was likely ten or eleven at the time, which explains a lot, because there’s not little here that would terrify anyone old enough to vote. However, even if provoking more laughter than screams (the hand in particular), this is still a thoroughly entertaining compilation of little chills, with most of the stories leaving me wishing they’d gone on longer. Creeping Vine was likely my favourite, about a family who come home from holiday and are held hostage by a sentient bit of foliage. It even proves capable of cutting the house phone line, so thank heavens we now live in an age where communication is vine-proof.

That one stars long-beloved radio DJ, Alan ‘Fluff’ Freeman [pauses to check he is indeed still beloved, and didn’t get Jimmy Savile’d… no, we’re good], and he’s not the only musical participant. Castle, of course was a notable jazz trumpet player, and he’s joined in the Voodoo segment by Kenny Lynch, who had some top ten hits in 1963, and supported The Beatles on their first tour. Others present in the cast include Michael Gough and Bond regular Bernard Lee, who all treat the material with rather more seriousness than it deserves. And certainly more solemnly than we did, instead glorying in the way nobody in any of these stories ever manages to contact the authorities.

It is, of course, always fun to see Lee and Cushing playing opposite each other, with Lee here a snooty art critic who is highly sceptical of Dr. Schreck’s tarot talents. There’s a Tales From the Crypt vibe in the way his character gets stalked by the severed hand of a disgruntled artist (Gough) who embarrassed the critic by getting him to critique the daubings of a chimp. This triggered the critic to commit a hit-and-run accident, that unleashed the beast with five fingers in question, on a single-handed (hohoho!) quest for revenge. Peter Lorre may have got there before, but I doubt he managed to face off against a severed hand with as much gravitas as Lee delivers here.