To any Brit of a certain age, the words “Royal Jelly” will bring up one immediate memory. The 1980 TV adaptation of Roald Dahl’s short story, part of the Tales of the Unexpected series, and starring Timothy West and Susan George. It tells of a bee-keeper who persists in feeding his baby the titular substance, much against the wishes of his wife. And she’s not wrong, shall we say. Among the most memorable 25 minutes of that decade’s television, it’s a bar which this movie of the same title, was always going to be hard-pushed to match. The results here, while not without merit, more closely resemble a Lifetime movie – probably entitled The Wrong Bee-keeper or something along those lines. 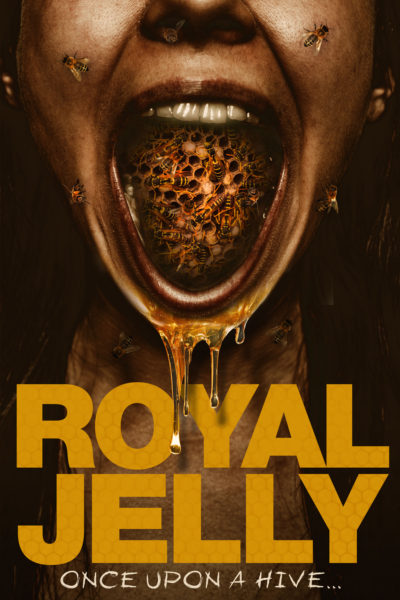 It’s the story of Aster (McCoy), a teenage girl with an unhappy home-life, bullied at school by her own stepsister. Her sole escape is with the bee colony to which she tends. Things change when substitute teacher Tresa (Lattanzi) arrives, and takes Aster under her wing (hohoho!). Eventually, Aster moves in with her new mentor, and begins to experience feelings for her son, Nick (Matchett). However, it gradually becomes apparent that there is something far from normal about Tresa and her hive-minded relations. Their intentions towards Aster may not be – oh, god, I can’t help it, I have to go there – as bee-nevolent as they initially appeared.

The initial set-up isn’t bad, with McCoy doing good work as the outsider, even in the embrace of her own family. Though with that said, they seemed peculiarly uninterested when she shacks up with one of her teachers. If it had been my daughter, I’d have been calling the police, and also To Catch a Predator. Lattanzi, too, has a decently “just off” edge, enough to give you a sense of something being not right, without pushing it too far. The problem is, the film continues to skirt along this slight unease, when it needs to be plunging head-on and embracing its horrific concept. There’s only one scene – perhaps a tribute to The Fly? – which generates the level of ickiness that should be near omnipresent in the second half.

Things aren’t helped by a finish which, unfortunately, may end up provoking more snorts than screams. In particular, bee wings that might marginally pass muster at a sorority Halloween party. At least the makers, wisely, avoided the final battle being Aster and Tresa trying to stab each other with their behinds. But in general, this does feel like it’s playing very safe, and outside of some harsh language, there’s little which feels like it would merit more than a PG rating. A slightly gross skin ailment is as extreme as it gets. Tales of the Unexpected was perhaps more graphic – though not having seen it in forty years, I can’t be sure. It is, however, unlikely I’ll remember the movie in 2061, for this Royal Jelly is, dare I say it, in need of significantly more sting in its tale.