Is this the most over-rated South Korean film of all time? Nah. That’d be Parasite. Oh, look: is that a mob with torches forming? But this is perhaps not far short. It’s reasonably entertaining, don’t get me wrong, and with a couple of impressive performances. But the script has some holes which are so glaring, I was unable to overlook them, and definitely help leave this well short of some of the more effusive reviews. It is – and stop me if you’ve heard this before – a South Korean film about revenge. Serial killer Jang Kyung-chul (Choi) abducts and kills the fiancée of Kim Soo-hyun (Lee), who works in the Korean intelligence community. Big mistake. 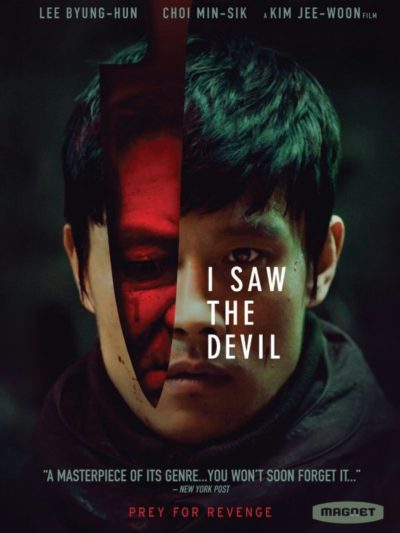 For Kim tracks down the killer, untroubled by the hoops of “due process” and “not torturing suspects for information” through which authorities like the police have to jump. But this process takes only a relatively small fraction of the (rather lengthy, at 141 minutes) running time. Rather than taking his vengeance immediately, he makes Jang swallow a tracker/microphone and lets him go. This allows Kim to follow Jang, as he attempts to continue his murderous and extremely brutal spree, popping up to save the victim and punish Jang some more, with broken bones, sliced tendons, etc. Eventually, the psychopath realizes what’s going on, and who Kim is, so decides his next targets will be the father and sister of Kim’s late fiancée.

I have… issues. It’s the kind of convoluted scheme that bears no relationship to real life, for a start, and only takes place in movies. Korean movies, especially: see Oldboy. I also found myself losing sympathy for Kim; after he has let Jang go, he becomes culpable in the deaths which follow. But my main problem are clunky elements like the ease with which he finds Jang’s lair, then within mere seconds has found his fiancée’s ring, even though it was flushed down a drain. What are the odds? But the biggest snort of derision was reserved for the recording device, which provides crystal-clear audio even when it is is literally deep in Jang’s bowels. That’s some fine Korean hi-fi technology. I wonder if Samsung were among the producers?

These kinds of gaffes are really quite distracting, and it’s a shame, since much of the film is better than that. The concept of “At what point do you become the monster you are hunting?” is one not often covered in the horror genre, but the director here gets right down into it, helped by excellent work from both leads. Choi, in particular, may be the creepiest serial killer since Silence of the Lambs. All the technical aspects are top notch, with some blood-curdling savagery that doesn’t skimp on bringing home the unrelenting awfulness of the antagonist’s actions. I do feel though that, thirty minutes less and a couple of script rewrites would have help elevate this towards the level I was expecting.