There are times when I don’t want to write a review. Right now, there is a large bag of Doritos and a beer calling my name in the living-room. But this is less a review than a warning. Specifically, do not believe the Netflix synopsis of this film which says, “Armed with a thirst for revenge, a vigilante makes justice her business after being hired by various women to seduce and humiliate their rapists.” This combined with the translated title, made me expect something along the lines of Girl With the Dragon Tattoo, and it does start along these lines, with the heroine (Lein) leaving a Mexico City rapist with a giant tattoo of scorpion just above his junk. Though, to be honest, it’s perhaps too bad-ass, If you’re talking about a punishment tattoo, you can’t beat the one in Aussie prison drama Ghosts of the Civil Dead: “CUNT” written shakily across the victim’s forehead. 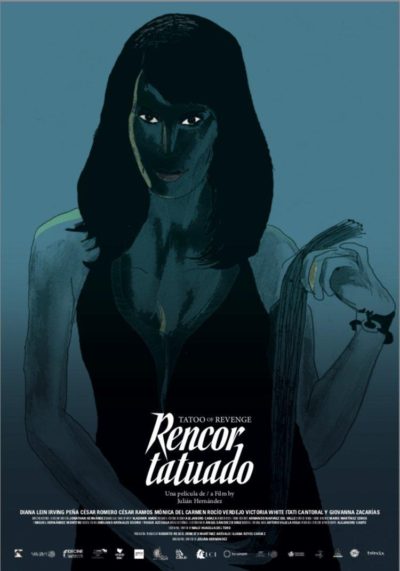 The bigger problem is, the film then largely gives up on the concept. It diverts instead, speeding ever further away from thriller territory, into a land where socially-conscious drama meets bad telenovela. Half the time is spent following arts journalist Vicente Colmenares (Peña), who recognizes the style of the pictures the vigilante sends of her work to the media, as being that of a renowned photographer. Except, that artist committed suicide years previously. The other half is some kind of murky corruption plot, involving police and politicians making porno videos in which they fuck transvestites like Marta (Medrano). This is mostly shot in  black-and-white, except for the copious flashbacks which are in colour, because reasons. It’s framed in 4:3 ratio, again because reasons, with the edges rounded off, because… Nope, I’ve got nothing. This is the kind of pretentious shit snobby critics like Armond White drool over. I, on the other hand, am here to warn you to stay far away.

Well, if you are looking for what one might loosely call “entertainment” anyway. Not least because, this is just not tedious and uninteresting, squeezing all life out of the premise, it is tedious and uninteresting at vastly excessive length. The running time here is a staggering one hundred and fifty-one minutes, and feels considerably longer even than that. I found myself checking to see how much longer there was to go at one point, and was profoundly disappointed to discover there was more than an hour left. That was when I had my existential dilemma. Maybe I should just turn it off, remove it from my Netflix history (to prevent it showing up on my ‘Continue watching’ row) and pretend it never happened. But if this review can save one person, my 2½ hours will not have been entirely wasted. I will say, the heroine, with her braided hair and no-nonsense approach, could have been a good character around which to base a movie. This, however, is not that movie.