This straightforward action flick doesn’t have much to offer in the way of surprises, but what it does, it does in an enjoyably no-nonsense manner. Van Damme and Adkins are Vincent Brazil and Roland Flint respectively, duelling assassins in Romania. Though for the latter, the past tense is more appropriate. Fir Flint went off the grid, taking with him a large sum of Interpol money, after his wife was gang-raped, beaten and left in a coma by Polo Yakur (Kaye). The crooked agents want their cash back, and look to lure him out, by getting Polo released from prison and putting a contract out on him. But Flint’s hit clashes with Brazil’s attempt, and neither ends up being successful, though Polo’s brother is killed by Brazil. With their target now on the alert, making their task considerably harder, the two assassins decide, reluctantly, it’s best to team up. 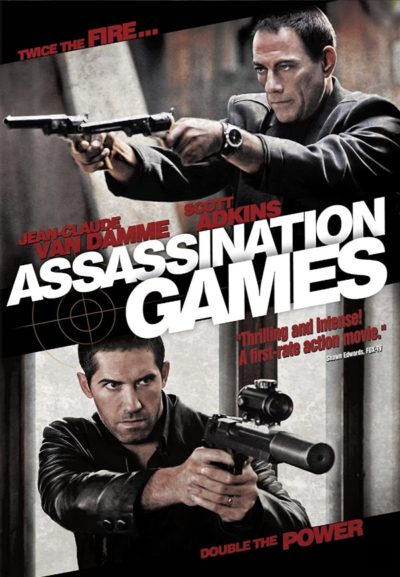 There’s also some stuff about Brazil befriending an abused prostitute, who inhabits the apartment beside his, with her vicious pimp. This can largely be ignored, though (in one of those not at all surprising twists) this relationship ends up giving him a personal motive alongside Flint’s. This angle feels a bit – okay, quite a lot – like Léon: The Professional, with an assassin living next-door to a scumball, takes the “innocent” resident under his wing. I did like the idea that Brazil actually has two apartments: the scuzzy, public-facing one, and the one next door, which he enters through a secret entrance in his bathroom, that’s considerably more luxurious. Wish they’d made a bit more of that, such as having Polo launch an attack on the wrong residence.

Back in the main plot, this offers a series of well-staged action sequences, as Brazil and Flint work their way towards Yakur, even if Van Damme is a step or two slower than in his prime. Though if you’ve seen a reasonable number of this kind of film, you’ll probably be able to predict the storyline beats before they occur. For example, as soon as they visit the villain’s armourer, and see a shiny, high-powered remote-controlled sentry gun… Well, it’s not that hard to figure out this piece of weaponry will make a featured appearance, doing its high-powered, remote-controlled thing, during their final assault on Polo’s headquarters.

But it definitely helps that both men here are actually decent actors; this is especially necessary for Flint, with his catatonic spouse [I can’t believe Chris actually started singing a certain Smiths’ song at one point…] It does feel like it left some potential on the table. For example, Brazil is proclaimed to be an expert in the use of toxins, but after we learn this, it doesn’t come into play again. However, I’d rather have this kind of film possess too much invention rather than not enough, since it indicates the makers are at least trying to put in the effort, above and beyond the bare minimum.