And so, the story of Hammer, at least in its “classic” form, comes to an end. Not with a bang, but more of a low-impact whimper. As we saw previously, for a few years the studio had been unable to fund movies on their own, needing co-production arrangements with the likes of Shaw Brothers or Terra Filmkunst. But if you watch the opening credits here, you would not necessarily know this had any connection to Hammer. It’s described as “The Rank Organization presents” The only way you might get an inkling of a connection to the studio is some of the names listed, e.g. musical supervisor Philip Martell and producer Michael Carreras. But it’s not until the end credits that the phrase “A Hammer Film” appears, to confirm that this was, indeed, the last hurrah for the storied company.

It is, of course, a remake of the 1938 movie, directed by Alfred Hitchcock. Less well known, even that was not an original idea, but was based on Ethel Lina White’s novel, “The Wheel Spins”. Writer George Axelrod and producer Carreras had previously worked on a version for American channel ABC, first with Michael Douglas and Candice Bergen, then Henry Winkler and Lindsay Wagner. After they passed, Carreras came back to Britain, and Rank agreed to fund the whole project – explaining the opening credits – having remade another Hitchcock film the previous year, in The 39 Steps. When originally announced in December 1977, George Segal and Ali MacGraw were the leads; at another point, it was to be Roger Moore and Faye Dunaway. Moore would, at least, have preserved the British characters from Hitchcock’s version. 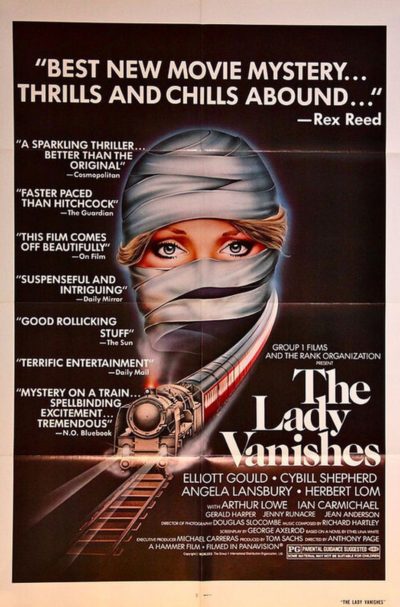 I haven’t seen that, or the BBC television version in 2013. So there won’t be any comparative element to this review. But the general consensus seems to be that the thirties version is the best of the three: in chronological order, the IMDb ratings for the three versions are 7.8, 6.0 and 6.1. Going into my viewing of this film, which I had not seen before, I was quite surprised the Hammer adaptation rated as high as it did. I’d heard very little about it, beyond it being the full-stop on their filmography until the name returned in 2008 [Though, to me, that was a resurrection in name only. I won’t be reviewing the likes of Beyond the Rave in the series] Yet this is a decent enough bit of fluff. While not something likely to stick with you, and certainly one of the most family-friendly films I’ve covered for this feature, it offers good production values and a solid cast.

This version does have the benefit of hindsight, so is able to adjust the setting slightly. It takes place the month before World War II started, adding a specific sense of urgency to proceedings. We start in Bavaria (Austria actually standing in for Germany in the production), where people are looking to get out of the country before things go pear-shaped. There’s a train leaving for Switzerland, but military operations have delayed it, leaving passengers to stay overnight in a local hotel. There, rambunctious American heiress Amanda Metcalfe Madvani von Hoffstetter Kelly (Shepherd) causes a brawl with her imitation of Adolf Hitler, and just makes it onto the train the next morning. She befriends English nanny Miss Froy (Lansbury, though the role was first offered to Bette Davis), who helps Amanda get over her hangover, offering her a nice cup of tea. The American then dozes off, back in their carriage.

When Amanda wakes, Miss Froy is gone. Odder, everyone in the carriage denies she ever existed, and so does, for example, the dining-car attendant who served them. Amanda grows increasingly concerned her pal has been abducted, and the growing fuss attracts the attention of a photographer for Life magazine, Robert Condon (Gould). While the rest of the train writes Amanda off as hysterical or drunk, and a passenger resembling Miss Froy is located, Robert believes Amanda’s version of events. Eventually, they find evidence suggesting that something untoward has indeed happened to the nanny. There’s no indication she left the train, so where can she have gone? Suspicion falls on Dr. Hartz (Lom), and the mysterious, bandaged patient who was brought on board at a previous stop… 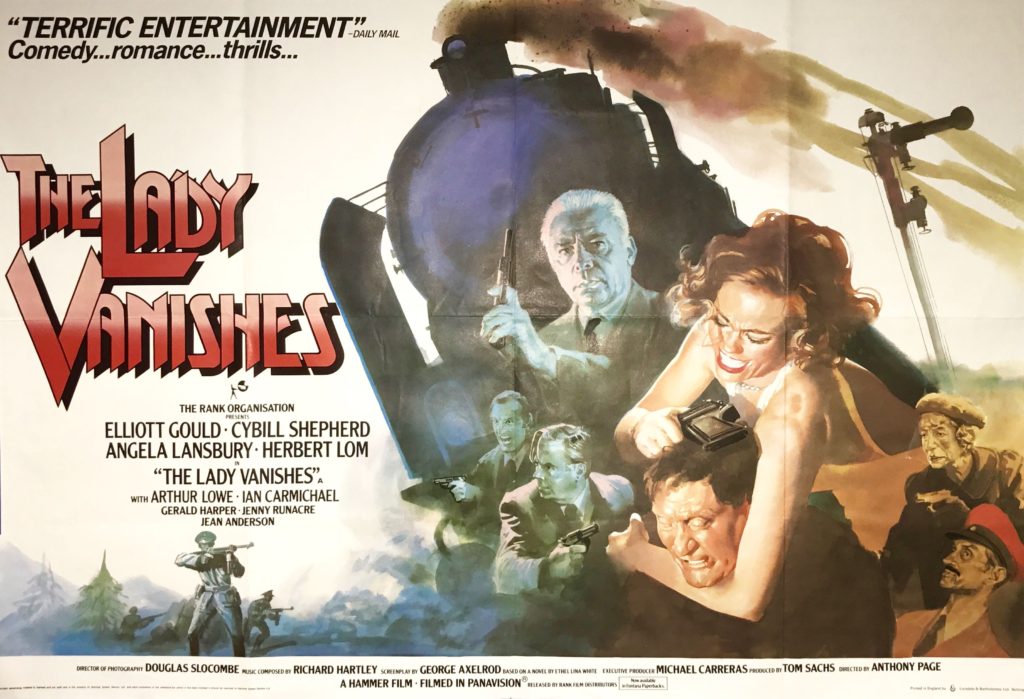 It’s all lighter in tone than I expected. Shepherd is well cast as the brash American, who ploughs her way through any criticism – the character was inspired by “screwball” comedy star Carole Lombard. Given that, Gould’s more understated, measured performance makes a good foil, and only occasionally does Shepherd become annoyingly shrill. Lansbury is quite adorable, though Chris did keep reminding me about her role in Bedknobs and Broomsticks. However, stealing just about every scene they’re in are Arthur Lowe and Ian Carmichael as a pair of English gents. They are more concerned about finding out the score in England’s game of cricket, than anything so trivial as the imminent outbreak of World War II. They deadpan their way through the increasingly volatile situation, ending with the train stopped near the Swiss border, under siege from a small group of German soldiers.

I think the moment which worked best was a small one: Amanda seeing Miss Froy’s name, which she’d written on the window during their tea-break, only for it to vanish before she can draw Robert’s attention. It’s a lovely little snapshot into the uncertain mental state of the heroine. The problem is, it doesn’t make sense in terms of the eventual resolution. Oh, well. While most of this works adequately well, albeit leaving little permanent impression, I’ll confess to being somewhat disappointed by the finale. I think part of that may be knowing the end of this also would mark the end of this project, which started back in the pre-COVID days of January 2020. During all that has happened over the 20 months since, our “Friday night Hammers” have been a reliable and regular comfort to us: we’ll miss them. I hope the series has given you half as much pleasure as it has us.