The anthology is a tried and tested staple of the horror genre, to the point it’s almost a cliché in itself. So credit to the film-makers here, for at least trying to mix things up. It’s just a shame that the results border on almost entirely unwatchable. I guess that’s one way to avoid the usual bane of the anthology, inconsistency. The main change is, rather than the stories following after each other in a linear fashion, after the opening one( about students taking revenge on their teachers), they are inter-cut with each other. This is a terrible mistake, in terms of pacing. 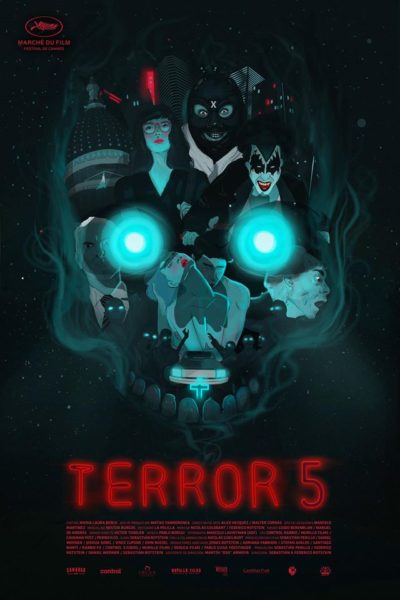 A normal anthology has a rhythm which repeatedly builds to a peak of release. This frontloads almost an hour of set-up, then has to rush and cram in all the payoffs into the last fifteen minutes. In addition, by needing repeatedly to switch between the stories, it destroys any sense of escalating tension. Not that there’s much to begin with, as most of the stories are blandly uninteresting. A group of friends watch a snuff movie. A couple go to a hotel which isn’t as private as they want. Two men arrange a bit of girlfriend swapping. And a pack of zombies rise to take revenge on corrupt politicians. The last mentioned is probably the most memorable, mostly because of the glowing eyes possessed by the undead. Though “least unmemorable” may be closer to the truth.

If there is a strength here, it’s in the look, which has a great palette of colours, and is crisply shot by cinematographer Marcelo Lavintman. The problem seems to lie in poor scripting, though it’s possible the stories, supposedly based on Argentinian urban legends, have resonance for local viewers that failed to travel. Part of the issue may be how, almost without exception, all the characters would need a telescope to see likeability, and are barely orbiting within the solar system of interesting either. The dick in the Kiss make-up takes the Annoying Twat award, in a landslide. The couple in the hotel are the least annoying, in the sense I was not actively cheering for their rapid, painful demise.

The structure might have worked better if there had been a strong connection between the stories, so it felt like there was a single over-riding theme joining them in some way. Instead, the only link is between the motel couple and the snuff viewing party (it’s really not hard to work out, either). The results therefore feel incoherent and chaotic, as if it had a script originally present, only for the makers to have randomized the scenes during the editing process. There just isn’t enough worthwhile for the viewer to put in the effort necessary to untangle the threads, and I was left feeling this was just a jumbled mess, albeit a nicely-shot one.