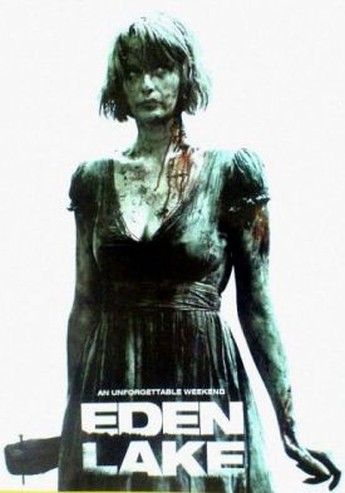 Kindergarten teacher Jenny (Reilly) and her boyfriend Steve (Fassbender) head out to the countryside for a weekend camping. While picnicking by the side of the lake, they encounter a gang of local yobs, led by Brett (O’Connell), who don’t take kindly to a request to turn their shitty music down. Worse is to follow, as both the couple’s car and their phone are stolen. Steve confronts Brett and demands the return of their property: that doesn’t go well (surprise!), and an unfortunate accident ensures that Brett and hs gang now have a deadly enmity for the young lovers. Steve is captured: with no car, no method of communication, and hunted by a pack of young wolves, it’s soon clear to Jenny that their prospects for survival are slim indeed.

After a shaky start – I mean. camping pretty much counts as a self-inflicted wound to us – this goes over the edge, starts to career downhill, and doesn’t stop until the very end. To clarify, that’s downhill in a good way, for I haven’t seen a film so relentlessly cruel in its approach for a very long time. It exposes the nastiest, most animalistic side of human nature, in a way which echoes The Doors’ lyric: “No-one here gets out alive.” Even those who physically survive (and there’s not many of those), do so only be surrendering everything which makes them human, and once lost, that doesn’t come back easily, if ever. Part of the chill comes from the everyday scenario: there are “juvenile delinquents” like Brett and his gang hanging around street corners in every town, and you’re left to wonder how far they might go, given the wrong push. Unremitingly bleak viewing, and all the more admirable for it.