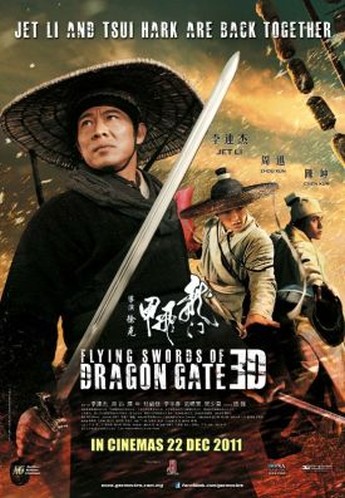 Hang on – I thought Jet Li had retired from making wuxia movies? Guess actors are as good at the whole retirement things as wrestlers – either that, or he “thought it over” for the $12 million payday he got here, likely considerably more than any of his Hollywood flicks. The stated reason was that Li was interested in seeing what 3D could bring to the genre: what’s clear, is that while Tsui has a very good handle on the visual side (no change there), all the 3D in the world can’t save a plot that starts with a lengthy slab of voiceover explaining how the Western bureau and the Eastern bureau terrorised the country as arms of the Emperor because…something. I know I should have been taking notes. Jet Li is the leader of a group of freedom fighters, who become involved in the hunt for a palace maid who may be carrying the Emperor’s son. All the parties involved – and there are a lot of them, not helped by at least two cases of people pretending to be other people – gather at Dragon Gate Inn, a remote desert outpost. It’s about to go into lockdown due to an approaching “black sandstorm”, which may also reveal a fabulous treasure, buried for the last 60 years.

The first chunk is well put-together, and I was just about able to hang on to the plot, by my fingernails. However, I think it was at the point that the doppelganger showed up, that I fell off the ledge. The rest of the way, I was largely reduced to admiring the pretty images and decent kung-fu battles, as I had no real clue who was doing what to whom, or why. That aside, Hark seems to have a better handle on the CGI than in Detective Dee, the effects here blending more seamlessly with the wirework. I also enjoyed Gwai Lun Mei’s supporting role as a treasure-huntuung Tartar princess who kicks ass [here, I should mention that this is a semi-remake of, semi-sequel to a 1992 film starring Maggie Cheung and Tony Leung, which was so full of action heroines, it’s reviewed Girls With Guns, and seemed to make more sense. It was, itself, a remake of a 1966 movie] I get the sense the film is simply overstuffed with characters, plot and visuals: while the result is delightful eye-candy, and an object lesson in using 3D technology without being crassly obvious or disenfranchising 2D viewers, it succeeds only as a technical exercise.