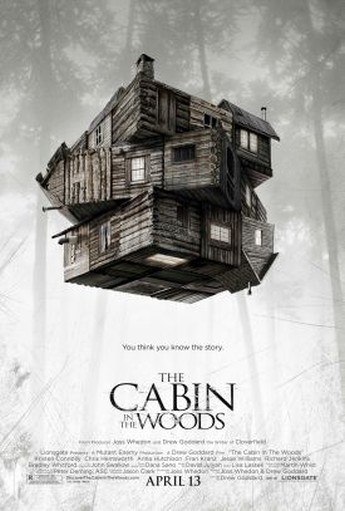 It’s very hard to review this, because a large part of the charm likely comes from not knowing too much about it. From that title, it looks as though it might be a straightforward “teens in peril” shocker, but right away, it’s clear there’s something more going on, with a couple of techs in a scientific establishment that are apparently setting something up at the titular location, and monitoring things to make sure the college students get there. Which is definitely not the usual scenario. When the subjects, who represent the standard stereotypes, e.g. slut, jock (Hemsworth), nerd, virgin (Connolly), and stoner (Kranz) get there, they discover a spooky basement full of mysterious paraphernalia, and reciting a passage in Latin from an old diary causes all hell to break loose – again, in line with the normal clichés. But the further this goes on, the further it diverts off-track, providing a fascinating alternative explanation for more or less the entire genre. I can, and will, say no more.

It’s both a horror movie and a meta-horror, and probably succeeds a bit better as the latter, with its references to other tropes, such as the long-haired Japanese ghost girl, which provokes much malicious abuse from the techs when that scenario doesn’t unfold as expected. You won’t be surprised to see Joss Whedon’s name crop up in the credits, as producer and co-writer, and it has some of the self-awareness you’d expect, though the main protagonists are far more unaware of horror films than any college students I know. Still, that’s a minor quibble and there are so many moments and angles to cherish, right up until the final reveal of a marvellous celebrity cameo. But if I can be forgiven one tiny spoiler: if the final shot had involved a Lovecraftian tentacle, rather than a hand, this could well have been the finest movie of the year. It’s not: however, it’s still damn good.