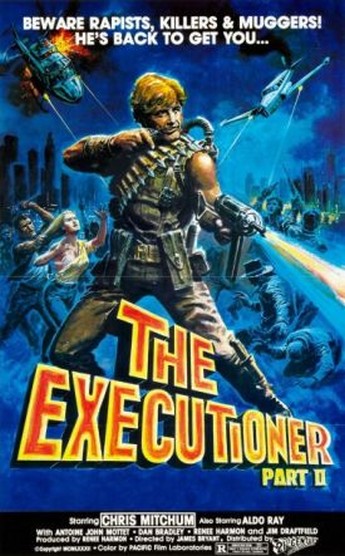 More than two decades before The Asylum became notorious for it, this may be one of the earliest examples of a “mockbuster”. There is no film called The Executioner for which this is the sequel: what we have here is an attempt to cash in on the Robert Ginty vehicle, The Executioner, also about a Vietnam vet who starts cleaning up the streets. There, the “hero” used a flamethrower. Here, the poster is trying to give a similar impression, even though the preferred method is actually stuffing a grenade into their clothing. However, the resulting pyrotechnics is a stock shot which looks more like the Death Star explosion than “grenade in trouser leg”] That’s just one of many weaknesses here, as veteran turned cop Roger O’Malley (Mitchum), investigates the vigilante, who may (or may not) be his friend, Mike. Y’know, his pal from ‘Nam who keeps having these PTSD flashbacks, before they were fashionable?

This is bad on almost every level, and mostly on the tedious level rather than entertainingly bad, thanks to the performances of leads who have two speeds: dead and hysterical. Mind you, there are a couple of moments which will stick in your memory, such as the person who, after being impaled into a sofa with a samurai sword, tries to chase after his attacker with the sofa attached. That’s something you don’t see every day. Sadly, very little else here quite reaches the same level of berserk surrealness, though the attack on a grocery store which involved the copious wielding of offensive dairy products comes closest. Then there’s Roger’s daughter, Laura, who is a special and unique flower, being a virginal drug-addict. Needless to say, that’s a combination which brings her the attentions of Mr. Cassalis, a crime lord known as “The Tattooed Man”, even though you’d see far worse these days manning the counter at your local Starbucks. It also leads to the immortal line, “Get back here! You’re letting my virgin get away!”

Add an investigative journalist, Celia Amherst (Harmon), who sports an outrageous European accent for no reason at all. She seems to alternate between damning the police commissioner (Ray) for not capturing the Executioner, and saying the vigilante is doing a better job than the cops. Oh, God: I completely forgot to mention Laura’s pal, Kitty, who appears to have come to the set straight from an off-off-OFF-Broadway adaptation of Reefer Madness, such is her approach to drugs. She doesn’t so much lure Laura down the slippery slope of drugs and sexual exploitation, as provide a running push-start to their two-woman bobsleigh. Ok, reviewing the last couple of paragraphs, it wasn’t quite as uninteresting as I remembered it. Or, at least, while still every bit as bad, it did have enough memorable moments to justify the 80 minutes you’ll otherwise never get back.